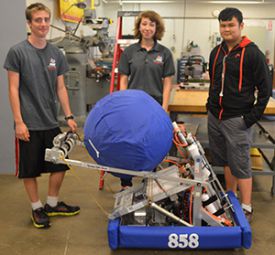 Students on the Wyoming High School FIRST Robotics team explain their robots’ ball-launching mechanism with notes of pride in their voices as they talk about competing against much bigger teams in intense match-ups.

They built the machine in six busy weeks last year, assembling parts that arrived in a box. They will start from scratch with a brand new ’bot this winter.

“I liked being the button-monkey,” quipped Tan Le, a junior, referring to pushing the button to launch the ball through a goal.

In the high school’s former metal-shop room, the dedication of the handful of tech-savvy teens shines. One big reason they have fallen in love with robotics: Brian Tunnell, a field service engineer for GE, who has helped them learn everything they know about engineering by devoting many hours to the program over the past five years.

Tunnell was named Wyoming Public Schools Volunteer of the Year for the 2013-2014 school year. But he gives credit to the students and fellow adult mentors who each year turn a jumble of parts into a competitive droid. The team is small– last year it was eight students — but highly committed. Dave Karsten, whose background is in construction, also is a mainstay volunteer.

“As long as there are kids that are interested, we will be there for them,” said Tunnell, whose two sons, 2009 and 2013 graduates, were team members. “We may not have the swankiest robot, but our kids can compete with what they have and do a good job.”

In an era at the high school when wood-shop, metal-shop and drafting classes are no more, and “building things” isn’t part of the school day, Tunnell serves as more than just a leader of an after-school club. He is introducing students to the world of engineering. “We teach them everything,” he said.

“One of the things that First Robotics really encourages is to do a mentorship program between the students and professionals, whether they are carpenters who can help build and assemble or engineers,” Karsten said. “There’s some time we take on our robot that is not necessarily productive to the advancement of the build season.”

For Tan, junior Jessy Monroe and sophomore Hunter Noorman, tinkering with tools and robot parts is a favorite pastime, and learning to build a machine for competition has become a passion. They are learning skills they can use forever.

“He is so dedicated,” Jessy said of Tunnell. “He is always here. Anything you need help with, he will go above and beyond.”

Robotics in Wyoming was started in 2001 by former shop teacher Bruce Klemm. Numbers were stronger then, but after shop classes were cut and Klemm retired, recruiting students became more difficult. This year Tunnell and Karsten hope to build numbers up to 20.

FIRST Robotics Competition, an annual event founded in 1992, helps students develop a passion for science, technology, engineering, and math and consider careers in those fields. Approximately 68,000 high-school students from 17 countries participated in the 2014 competition.

Qualifying teams from Michigan’s district competitions advance to the state level. The top 30 teams internationally advance to the World Championships. The intense six-week robot build season, starting in January, involves a student-led process to construct a robot designed to complete a specific challenge.

The State of Michigan invested $3 million into FIRST Robotics last spring. The 2015 education budget includes another $2 million in district grants. The state money benefited Wyoming, which operates on a small budget, last year with a $5,000 grant, an allocation the school district matched. Other funds come from the Greater Wyoming Community Resource Alliance and GE serves as the main sponsor. The team plans to apply for another state grant next year.

Another huge reason to get involved: $18 million in college scholarship money is available for students involved in FIRST Robotics, Tunnell said.

The team makes room for all students, no matter their experience level. Students’ knowledge grows over time.

“I went from not knowing how to program it, to being able to program and build it and drive it,” Hunter Noorman said.

Tan learned the intricacies of machine-building. “They helped me participate in the building such as the electrical circuits and the connection for Wi-Fi,” he said.

But it’s about more than just engineering, Tunnell said. Students learn teamwork, cooperation and how to present themselves in front of judges who ask about their build process.

“These kids, the whole team clicked so much last year,” Tunnell said. “They were a team from day one.”