Past the Finish Line: Ironman Race to Help Students 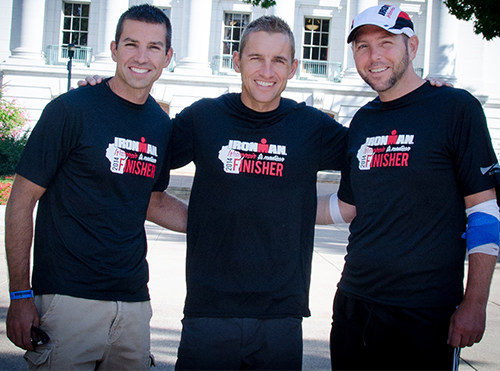 Proving a will as strong as steel to give back to children in their community, two Byron Center Public Schools principals and a board of education member crossed the Ironman Wisconsin finish line — dehydrated and sore, yet strong.

Now they bring back to the district the message that perseverance pays off, byhaving raised $8,782 to support children in the community.

The money they raised is already having an impact on Byron Center Public Schools students. “We’ve been paying along the way,” Joseph said.

The organizations they supported, with logos printed on their race gear, include:

Getting to Race Day

The trio volunteered together at last year’s Ironman Wisconsin, and the idea for competing for a cause began to take shape. From there, they logged the miles during long training sessions and early morning workouts. They said they credit their families for being willing to put up with their rigorous schedule, and the community for showing a huge amount of support.

Trout, now a 10-time Ironman finisher, served as a mentor for Joseph and Pierson throughout the process, guiding them through everything from bike maintenance to nutrition and training techniques.

Preparation went above and beyond the norm. Trout and Pierson competed in three half Ironman races over the summer in Grand Rapids, Virginia and North Carolina. Joseph also participated in the Grand Rapids race.

More than a Race

The men said what they take from the experience is much greater than accomplishing an athletic feat. After all, there’s a lot of time to think while training for an Ironman.

Every curve, mile marker and event change can represent something bigger. Ironman requires facing the present challenge, not focusing on the finish line far away. Thinking too far ahead is too daunting. That’s a life lesson that applies to many circumstances, Joseph said.

“It comes down to a mindset,” Joseph said. “You can really do anything you want if you break it up and do one turn at a time. You live in the here and the now.”

“Everyone goes through bad patches in life. There will be light at the end of the tunnel,” he said “Ironman is definitely a metaphor for all of the tough times in life. At the end is that glorious finish line. It starts with your thinking. Are you willing to take one step, just one?”

As educators, Trout and Joseph smiled at the impact these metaphors can have on their students, the ones struggling though something difficult in class or outside of school. With the students who say, “I couldn’t do that” or “I can’t,” they tell them to just add one word to the end of those negative sentences and notice the difference: “Yet.”

Wiping Out but Not Giving up

For Pierson, a business innovations leader for Amway, getting to the finish line proved the most difficult.

Just before the 90-mile mark of the bike ride, after a steep downhill stretch ending in a sharp turn, Pierson crashed. Bleeding in several places from hitting the pavement, and breathing through the pain of a sore rib, he had to reevaluate.

“I definitely had to process, ‘Is it time to hang it up or keep going?’” he said. “I just got to thinking about Scott and Tom and all the kids helped by the charities, and there was no way I could not keep going.”

By the time he was in the marathon’s second half he knew he could finish. He kept pushing and even beat his goal time by nearly nine minutes.

To Trout, Pierson’s experience is what it’s all about. “Jason truly embodies what an Ironman is,” he said.

You Caring: BC Ironman for BC Kids

Christmas in August wraps up