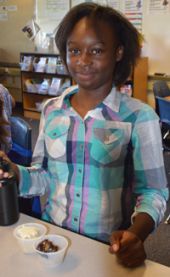 Question: What tastes better, cake mixed by hand or with an electric mixer?

Answer (as determined by Southeast Kelloggsville Elementary fifth graders): Both are pretty good, but cake is moister and less crumbly when made with an electronic mixer.

Fifth grade teachers challenged students to a little baking lesson recently that got them thinking about the science topics of force and motion and the effects of fusion, energy and friction.

The result: eight cakes cooked and frosted for taste testing among the classes. Each students sampled hand mixed and electronically mixed pieces.

Students learned the differences in how motion and energy, taught in the fifth grade science curriculum, is created by a simple machine versus by hand. While tasting the chocolate- and vanilla- frosted creations, students compared and contrasted which cake tasted better.

“A lot said they like mine, a few said hers,” said student Miriam Vargas Hernandez, who took on the role of mixing with the machine. “Even if they look the same, they can taste different.”

Students wrote about the similarities and differences they detected in the finished baked goods, and determined the winner. Hands down, the electrically-mixed cakes received the most votes.

Bradley said demonstrating concepts helps students understand them and that helps them in all subjects. 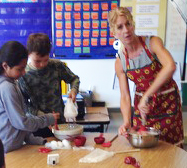 “If they can see something in action and then connect it to something they’ve seen in their own houses, they can better connect it back to their writing,” she said.

“I learned how to bake a cake!” he said.