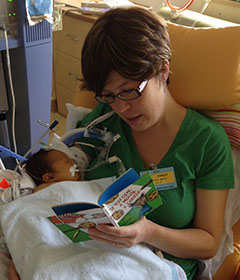 Parents and staff members are joining forces Oct. 7 in a registry drive to help find a donor for a Byron Center  teacher’s newborn who needs a bone-marrow transplant.

Benjamin Liao, the only child of Countryside Elementary School teacher Mandy Liao and her husband, Tim, was born Aug. 21 with acute liver failure. Tests determined he has Hemophagocytic Lymphohistiocytosis, or HLH, a rare immune system disorder that damages healthy tissues and organs, including the liver, bone marrow and central nervous system. If untreated, HLH leads to death. Benjamin is receiving treatment including chemotherapy at C.S. Mott Children’s Hospital, in Ann Arbor.

Doctors hope to perform a transplant in two or three months, she said.

Staff and parents are hosting a Marrow Donor Registry Drive from 4 to 7 p.m. Tuesday, Oct. 7 at Countryside Elementary School, 8200 Eastern Ave. SE. At the drive, people can join the “Be the Match Registry” by simply having their inner cheeks swabbed, which adds their tissue type to the registry.

Be the Match, operated by the National Marrow Donor Program, has managed the largest and most diverse marrow registry in the world, with 11 million people registered. Michigan Blood is the state’s partner for Be the Match.

“We’re hoping to have hundreds of people come out, maybe even thousands,” said fourth-grade teacher Jenny Curtis, who has worked with Liao for 10 years. “We are trying to get the whole school district involved. and get the word out to all the community.”

Joining the registry is easy, and could save lives anywhere in the world.“It’s not just a match for Ben, it could be a match for anybody,” Curtis said.

Local hairstylist Denise Kooiker, whose fourth-grade son is in Curtis’ class, heard about Benjamin’s condition and the need for a donor from Curtis. It automatically rang a bell.

Kooiker had recently spoken with one of her new clients, Ryan Jaques, about her job with the Michigan Blood “Be the Match” Department.

“I stood there going, ‘I know the person who makes this work’,” Kooiker said. “I thought, ‘I have to call Ryan’.” Within 24-hours the drive was scheduled.

Curtis said she is hoping for a perfect match for Ben. “It would be amazing if we could find a match for baby Ben right here at the Countryside donor drive.”

The school is also accepting monetary donations to help with the drive and cost of the kits. Students are paying $1 to wear a hat to school (if they wish) on the day of the drive to help cover costs.

“The community love and support in Byron Center have been amazing and overwhelming. We have received so many well wishes, prayers, support, and care packages from families and from the staff from my school and the other schools in Byron Center,” Liao said. “I can’t begin to thank everyone enough for everything. I’m so thankful that this drive has been organized to help add more potential life saving donors to the bone marrow registry.” 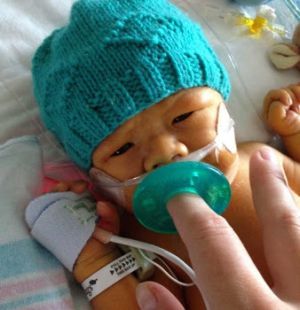 Be the Match Registry