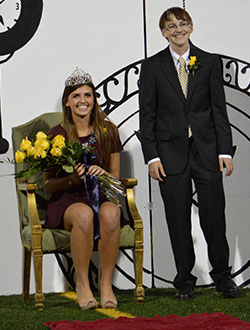 When Champlain “Champ” McCahill was first diagnosed with brain cancer in 2010, he asked if he was going to die. His doctor said she believed he would survive, but he had a “really big mountain to climb.”

Champ, 18, has not had a recurrence of the cancer that took his ability to walk, speak and eat, skills he has had to relearn. He looks forward to graduating in May and attending Aquinas College next year. He eventually hopes to go to Notre Dame University and become an attorney, a motivational speaker and a basketball coach.

Known at school as a “friend to everyone” the senior class crowned Champ this years’ Homecoming King. That moment during half-time at the football game, when the king and queen were announced, is one Champ will never forget, he said.

“When they said my name, it’s almost like that feeling where you kind of freeze and count your blessings,” Champ said.

The youngest of five children, Champ was a kid who always had a ball in his hand. He was captain of the basketball and football teams. “He was an awesome athlete and an awesome student,” said his mother, Peaches McCahill.

For about a year, Champ would get ill frequently, and he lost weight, his growth stopped and he had headaches. Finally, his mother insisted on an MRI, which revealed three brain tumors. Two surgeries, radiation, chemotherapy, and 92 days spent at Helen DeVos Children’s Hospital followed. Because of the location of the tumors in Champs’ brain, his speech and motor movements were affected.

He has regained much of what he lost, with help from therapy at Mary Free Bed.

Students and teachers rallied around the McCahills during Champ’s illness, wearing “Team Champ” shirts, and bracelets in his honor that said, “I am strong. I am confident. I am Champ.” They honored him at their 2010 Hearts of Gold game while raising money for Helen DeVos Children’s Hospital.

Lifelong friend AJ Zawacki, a senior, was the first non-family member to see Champ in the hospital. Champ’s optimism always shined through, he said.

“Even when I went to visit him, he made jokes the same as he always would have,” AJ said. “He’s always joking around and has a really positive attitude.”

Teacher Nick Hopkins  remembers Champ returning to school following treatment. “I remember him walking through the door that first day, He had a cane; he was frail and looked like a kid that had battled some tough times, but the one thing that has always resonated with Champ is his smile. It’s absolutely contagious.”

Peaches said Champ was good at winning over the doctors too. He made many a serious physician perform by giving them Team Champ T-shirts, but only if they danced for him first.

“I would say, ‘I’m not going to give you a Team Champ shirt for nothing,’” Champ joked.

A Friend to All

Before the game, Principal Jenny Fee asked Champ if he was going to Homecoming with friends. His answer was totally his style, she said “He said, ‘You know Mrs. Fee, I’m everybody’s friend,’” Fee said. Champ said his illness changed his perspective, including motivating him to make the extra effort of getting to know people. “Really, you can just live as long as you can. I treat everyone equally,” he said.

AJ said Champ has always taken the time to be kind. “He cares a lot about people. He’s always worried about me, and asks me how I’m doing,” AJ said. There was no coordinated effort to name Champ the Homecoming King. It just made sense, AJ said. “No one was like, ‘We should all vote Champ. He just deserves it,’” AJ said.

When asked about being named Homecoming King, Champ referred to the figurative mountain doctors told him he faced. “Being the king, for a moment, I was at the top,” he said.