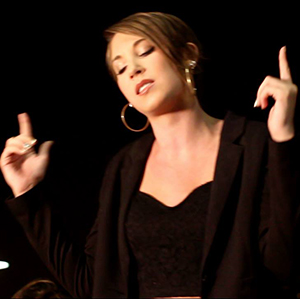 During her four years at East Grand Rapids High School, Katie Tucker immersed herself in music study through classes, choir, orchestra and musicals.

Tucker, whose artist name is Atrel, is performing during the 7 p.m. home football game against Grand Rapids Christian with the high school dance team.

“This school gave me my start. The faculty was so incredibly supportive of my dream, especially in the music/drama department,” Tucker said.

Tucker, daughter of East Grand Rapids government teacher Janice Yates, attended Berklee College of Music, in Boston, after high school before moving to New York, where she has spent the past two years.

But she said she developed her musical roots in EGR.

“It took over my life in a good way,” she said, noting that as a junior and senior she worked in independent study with then Choral Director Mark Webb, arranging music with him for the choir to perform. She had three music classes per day and sang in the top choral group, The Madrigals, She was principal violinist in the orchestra and performed in plays and musicals.

“Her lyrics and vocals are so unique and it’s exciting she is coming to town to share,” said EGR High school theatre teacher Pamela Steers.

Tucker began writing and recording pop music in college, which led her to New York City. She draws inspiration from pop singer and songwriters like Jessie J and Sia. She said “Throwback” has a Sia/Rihanna influence, but with her own personal twist and message.

“The message being: Embrace change. You are the person you are now for a reason, and don’t let anyone compromise that. Celebrate the past and then let it go. Let it be what it is: a throwback,” she said.

Tucker said her career goals have gone from writing songs for other artists, to being the singer onstage. “Throwback” is the start of ongoing promotion for her upcoming EP, which will be released in the next couple of months.

“I want to travel the world and perform, but I also still want to help develop artists and write for them. I still have that passion, and I believe that I can do both,” she said.

She wanted to dedicate her first single to East Grand Rapids High School because it’s where she began working toward her dreams.

“What better way to release “Throwback” than to dedicate it to my high school and perform it here officially for the first time? It’s the ultimate throwback,” she said.

Yates said her daughter was always all about the music.

“I knew she would always be working with music in some respect. As her mother, I never knew if her incredible talent was a creation of my mother-pride or was real, but I have been assured that it is the real deal. Every time I watch her perform, I am simply blown away. I am ecstatic that she has chosen her Alma Mater to kick off her music career as an artist. I couldn’t be more proud,” she said.

Tucker plans to give free downloads to students and faculty.

‘Let’s get together and play some music’

From wildlife biologist to ‘faux-brarian’