Teens Encourage Peers to Open Up 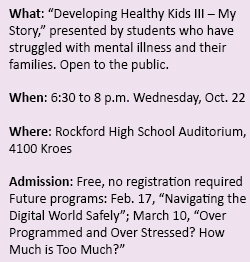 Brittany Hayes and Mackenzie Vallad started their high school careers with more than the usual adolescent angst. By halfway through ninth grade, both were battling mental illness.

Brittany was up against the eating disorder of anorexia. She missed school for most of that spring and the following fall while going to inpatient treatment programs in Grand Rapids and Ohio, and keeping up with her studies at home.

For Mackenzie, serious depression caused her to miss two weeks of ninth grade for outpatient treatment. It took a couple months of intensive therapy and two more years of counseling to put the demons behind her.

“I was never to the point where I was about to kill myself, but those thoughts were constantly in my head,” says the Rockford High School senior. “There were always voices in my head that would be telling me to, but I just never gave in.”

Today, she is doing well in school, was crowned Homecoming queen and plans on studying education in college. She may not be fully healed but is mentally much stronger, she said: “I’m able to push the voices away a lot easier than I could, and I’ve learned to open up more.”

She and Brittany hope to encourage other students to tell someone about their inner struggles. They will speak at an Oct. 22 community forum on mental health at the Rockford High School Auditorium.

“We want people to know it’s OK to open up,” said Brittany, also a college-bound senior who is doing well academically. “We’re trying to show people that we opened up, we got help, and it was worth it.”

“Families have benefited by receiving specific and important information related to a variety of topics such as mental illness, substance abuse, electronic safety, and parenting tips to support their child through these formidable years,” Myers said.

Other programs this year will address how to safely navigate the digital world, presented by author Kevin Honeycutt on Feb. 17, and the danger of over-programming children in a March 20 presentation by family therapist Sheri Moskowitz.

Series topics are chosen by the school district crisis team with input from mental health providers and Rockford Hope, a community and parent group focused on mental health issues.

In the Oct. 22 program, titled “My Story,” the students and their families will share their experiences from initial diagnosis to treatment and ongoing support. Mental health agencies and school officials will be on hand to offer assistance to families seeking help.

“Adolescence is a really difficult time of life,” Young said. “You’re going from basically a kid to an adult, and it seems like you’re doing itin a couple years. So much is coming at you all at the same time.”

The seniors’ willingness to tell their stories will help others waging private battles, she adds. “Seeing these girls stand up in front of other students normalizes a lot of what they’re feeling: ‘Maybe I’m not so different after all.’”

Brittany and Mackenzie said although their friends knew of their struggles, they decided to talk about them more publicly after working with Rockford Hope last year. The Developing Healthy Kids program seemed a good starting point.

“We wanted to start this so we could have a student-to-student (presentation),” Brittany said, noting the series has often featured professionals speaking primarily to parents. “We’re trying to get more students to come by having students be the ones talking.”

Her mother, Kim Hayes, said she is proud of Brittany for sharing her experience. Noting it was Brittany’s friends who first told a school counselor they were concerned about her, she hopes other students will be emboldened to seek help for a friend or themselves.

“It’s not a problem you alone have to solve,” Kim Hayes said. “It’s a full circle. By them speaking out, I hope that’s the message they receive.”

Mackenzie got help by confiding in a church youth leader, who informed her parents.

“We just want to let people know it’s OK to admit your problems,” said Mackenzie, adding, “I wouldn’t want to change my experience for anything.”