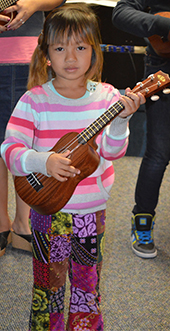 The 5- to 7-year-olds were busy matching plastic letters to their friends’ names, learning the shapes and sounds of the English alphabet.

“Look at this!” yelled one student in accented English, as he showed his work to Miguelina Quinones, the program’s kindergarten through second-grade teacher.

The students have varying levels of English and school experience. They arrived from countries in Africa, Nepal, the Dominican Republic and several other places in recent months. Last year, students came from 17 countries and 17 native languages were spoken throughout the building. At Meadowlawn Elementary School, 33 percent of students are English learners. Many come from war-torn countries and have lived in refugee camps.

In the Newcomer classroom, one student was a little off task. “What do you have to do?” asked Quinones.

The boy paused to find the right word. “Listen,” he said, emphasizing both syllables.

Pictures, hand signals, letters, numbers and words, all taught by teachers and paraprofessionals devoted to helping immigrant children, are helping these youngsters learn English in preparation for enrollment in a regular classroom. The yearlong all-day program has allowed time allotted for English instruction to increase dramatically. Main focuses are speaking, reading, writing and listening skills.

Getting Them Off to A Good Start

The Newcomer Center Program is located at Meadowlawn for grades kindergarten through fifth, and at Crestwood Middle School for sixth- through eighth-graders. At Crestwood, about 40 students attend the program each year. Students there join regular classrooms for part of the day and focus separately on core subjects like reading and math.

Last school year, according to Meadowlawn Principal Michelle Downs, 54 percent of elementary students showed 1.5 to 2 years of reading growth as gauged by the Scholastic Reading Inventory program, and 46 percent showed .5 to 1 year of growth.

The Meadowlawn program draws from all 10 elementary schools, and after a year students start regular programs at their home schools. A total of about 75 elementary students will attend throughout the year, with students trickling in over the months.

Before the program started three years ago, students were receiving 150 hours of language instruction per year. They now receive more than 1,200.

“When you look at the difference in the number of minutes that these kids are getting in high-quality instruction, we’ve really turned the tide in giving these kids the foundation that they need to be successful back in their classrooms,” Downs said,

Students are also opening up more, she added.

“One of the the goals of this was providing an environment where kids felt safe enough to use the language and to learn, and to make mistakes. In an environment were everyone is learning English, kids are taking risks, speaking

English at an earlier point.”

In the third-fifth-grade classroom, teacher Chellie Howard compared a student’s work from September to May. In the fall, the student, from Tanzania, had drawn a picture and written a few letters and numbers scattered around the page. In May, she titledher paper “Friendship” and wrote in sentences and paragraph form.

“Some of my students have never had the opportunity to go to school before in their lives,” Howard said. “I have third, fourth- and fifth-graders who have never had school, or have had refugee school and can sing the ABC song and that’s it. Their parents maybe have not had an opportunity to go to school. I can get third-graders who still don’t know how to write their name.”

Howard starts by teaching the alphabet, numbers and the names of items, as well as basic phrases, phonics and words students need to read by sight.

But students are also required to meet the same state content standards as all students in their grade level. Howard pointed to information on her walls on states of matter, molecules and scientific tools. They are learning language and grade-level content at the same time.

“By the end of the year they are reading, on average, at middle to end of first-grade level,” she said. “Some of them go higher. They know their letters and sounds; they can put together a simple story for me.”

Students also learn social skills, Downs said. Many aren’t used to U.S. norms such as using indoor bathroom facilities. Some have to be taught to go inside. But teachers aren’t taken aback because they understand the students’ circumstances, Downs said.

“The culture of Meadowlawn really embraces our English learners. It’s really who we are as a building,” Downs said. “For us it’s amazing to watch kids go from not having any English language to being able to participate in class and have basic language skills and basic academic skills.”

Fourth-grade student Victor Fnu, who immigrated with his family from Myanmar 18 months ago, said he likes “everything” about school — “math, reading, writing.”

He said he was “a little bit happy” when he first started. He remembers learning to read and speak English. “When I was in the class it was kind of hard to read the easy books.”