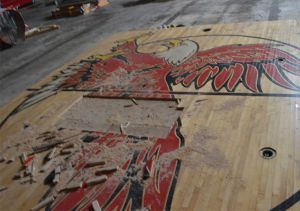 Kent City High School students Michelle Alt and Kora Wright said they didn’t mind their September 27 homecoming dance being held outside because of ongoing repairs to the school’s gym and wrestling room.

A storm last April with winds estimated at 100 mph tore large holes in the roofs protecting both rooms, leaving behind nearly $3 million in damage. But homecoming is important, so this year’s dance went on as scheduled but outside – in the school’s courtyard – complete with lots of decorative lighting and students chose to look at the bright side.

“It wasn’t as hot as it usually is,” said Michelle, a 15-year-old sophomore. “It was kind of neat to have it outside with all the lights and stuff.”

“You had lots of space, too,” echoed Kora, a 14-year-old freshman. “It wasn’t as crowded, so you didn’t have people so close when you danced.” Kora conceded the damage has made for small disappointments. As a freshman she’d been looking forward to playing volleyball in the big gym this year.

“We had to play in the middle school gym,” she said. “As a freshman, it didn’t feel as much like high school.”

Inconveniences aside, like last spring’s graduation which also was held outside, the repairs are on track to be completed by Thanksgiving, in time for basketball season, said Doug Weston, the district’s operations director. He said repair costs have come in nearly three times original estimates because last spring’s storms blew around HVAC equipment, causing extensive damage to the roof’s rubber membrane which waterproofs it.

The storm left inches of water on the gym floor, which was recently replaced. The gym’s scoreboard, sound system and lighting also had to be replaced. “We basically have a new roof over everything except the swimming pool where there wasn’t any damage,” Weston said. “Our goal was always to have it completed by the start of basketball season. Right now, it looks like we’ll make it.”

“The only real effect it had was on some of the fall sporting events,” Weston said. “We had to push our girls’ volleyball over to the middle school, but it hasn’t really affected the classroom.” 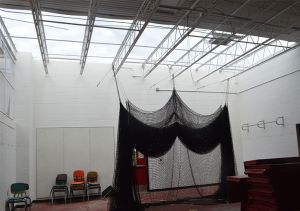 Principal Bill Crane conceded there have been slight inconveniences but students have taken them in stride. And the repairs to the facility built in 1975 really are quite impressive, he said.

“The lighting is so much better that I’ve been joking with some of the kids that they’ll have to wear sunglasses in here,” Crane said. “We’ll have a whole new gym by the time they’re done.”

‘Committed to everything he tries’