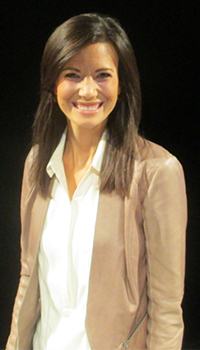 A collective gasp filled Rockford High School’s auditorium when Rachel Ramsey Cruze told the story of a 20-something college graduate who had amassed $90,000 in student loans following graduation. The groaning didn’t end there.

This same graduate married a woman who also was saddled with $90,000 in student loans, for a shared debt load of $180,000. Their financial obligation led them by the nose for years to come.

“For 10 years straight, (much of) their money will go straight from employers to lenders,” Cruze told about 600 Rockford seniors recently. She is the daughter of financial author and motivational speaker Dave Ramsey, and co-author of the book, “Smart Money Smart Kids: Raising the Next Generation to Win with Money.”

Cruze gave students some common sense insights to help them avoid pitfalls college freshmen often make. She said high school students need to be aware the decisions they make while in college often follow them long after they’ve earned their sheepskin. That’s why it’s important to know how money works, she stressed.

“Just avoid the mistakes that take some people years and years to get out of debt,” Cruze said. “Money is just common sense.”

“They’re not close to being financially literate yet,” Fike said of students. “I love teaching the class because it’s new for them and easy for them to understand why it’s important to them. Everybody needs to know how to manage their own money. It’s not something you memorize for a test and never use again.”

Cruze offered plenty of financial pointers for students to use. Among them:

Cruze’s talk was eye-opening for senior Jeff Harmon. “I didn’t know you didn’t need a credit card to get a student loan,” he said. “That was quite surprising.”

“I like the idea of people saving more,” added senior Amanda Strome, who plans to study finance in college. “It’s so easily forgotten.”