Students Pilot Use of Tiny Aircraft as Science Tool 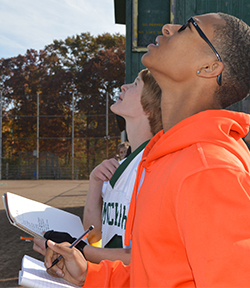 Comstock Park High School freshman Zaavon Scott stared up at the small aircraft buzzing overhead. With his notebook in hand, he was ready to write down data about the machine.

“It’s working on it’s own from a computer,” said Zaavon. “It’s sweet.”

The vehicle sped along its path over the high school’s baseball diamond. It was launched by Kent ISD STEM consultant Ebiri Nkugba, and programmed from a nearby laptop. This flying vehicle is technically called an Unmanned Aerial Vehicle (UAV), commonly – referred to as a drone, he explained.

Four science and four math classes experimented with the UAV experience. Students learned how the machine gathers data which can be used in everything from agriculture to construction, mining, inspection and even archaeology. Nkugba and Rick Mushing, a mechanical engineer and Kent ISD STEM consultant, introduced this emerging technology for students to apply to their studies. They hope to use it in many other schools.

“We were wanting to pilot what students can learn in physics, math and science classes,” Nkugba said noting that vector analysis taught in Comstock Park High School math is used in planning flight.

“It’s pretty stinkin’ cool right” Nkugba said. “The rest of it comes when the students start analyzing that data.”

Mushing said the drone’s ability to capture images is amazing. “From 100 feet up, when it zooms in, we can see how much dust is on your boot,” he said.

Think of the applications for agriscience alone. “At that level, you can say, ‘that grape right there has low nitrogen or not enough water,” Mushing said.

Just seeing the vehicle in action was enough to capture the students’ attention. “It flew over us,” said freshman Victoria Wade. “It’s amazing that that little thing can do all that.”

A Science Lesson Taught by Drone?

Science teacher Steve Virkstis used data collected by the craft for a unit on light energy. Each class put a different colored filter on the craft’s camera to filter out certain wavelengths of light.

Stationed in different areas, students measured the temperature of asphalt, grass and dirt, and used a device to measure reflected light. Data from the student measurements was combined with UAV data as part of the science lesson.

Students also used homemade devices to measure the height of the UAV and its angle over the horizon.

The FFA is currently drafting legislation regarding use of these aircraft.Right now Kent ISD consultants are working under hobbyist rules, which required national certification. Commercial use is not currently legal. 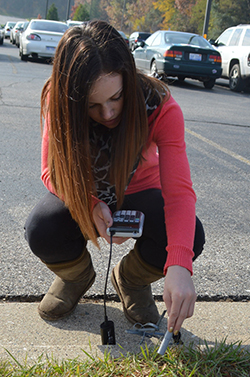 If UAVs become legal to use in business, the impact could be huge. For transportation purposes alone, they could replace today’s processes for mapping roads and roadside features, identifying potholes and examining roadways. The expected spending on UAVs over the next 10 years is $89 billion.

Students said they were impressed by the experience.

“These things are a little more complicated than one may think,” said senior Domenic Parker, who noted the computer programming involved in making the technology work.

“It’s not just about inventing things, it’s a matter of making it all work,” he said.