Principal Stresses ‘Education Is the Road Out of Poverty’ 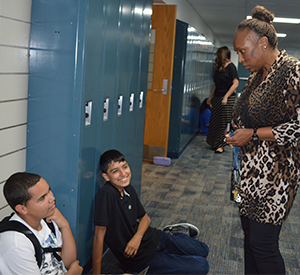 As a child growing up in inner-city Chicago, Kathryn Curry had friends who were at school one day and gone the next, after their families were evicted from their homes.

She attended a funeral of a friend killed by a gang.

She remembers white students scattering in her presence as she walked the halls of the American Conservatory of Music, where she was one of the first black students ever admitted in 1979.

The Chicago Public Schools buildings she attended relied on hand-me-down books and desks; her neighborhood was plagued by violence; and she developed an acute awareness, when she went to church with children from more affluent areas, that things were not equal.

Curry’s perceptions as a child have influenced her life’s work in urban schools, and now as principal in the poorest district in Kent County. Curry is well aware of the challenges her 930 Lee Middle/High School students face — not only as an educator and a scholar, but from her own experiences growing up in Chicago.

See the SNN Series on Poverty
The Burden of Poverty; a Backpack of Heartache

Godfrey-Lee Public Schools is one of the smallest districts in Michigan, but like Chicago, its challenges include high financial need. Eighty-nine percent of students receive free or reduced-cost lunch. In the one-square-mile, mostly Hispanic community, 38 percent of students live in households that earn incomes below the poverty line.

The sobering data, however, doesn’t form a complete picture of her students. She describes an exciting vibrancy when everyone comes together during the school day.

“I like an urban environment,” Curry said. “I like the rhythm of it, of being in this environment. Kids are kids. We have really wonderful kids and families. It’s just a close-knit family.”

Curry graduated from Chicago Public Schools in 1977. She became aware of inequity in the world just by living in her own South Side neighborhood. Students at her school lacked many basics. But many children at her family’s church, which included people of different socioeconomic backgrounds, had much more. She realized this distinction at about age 8.

“Chicago schools are really segregated by location, so that’s what really started my interest in delving into how poverty affects learning and what are the consequences of not having that level playground.”

Her experiences shaped her as a teacher and administrator. She wrote her thesis on how poverty affects education to obtain her master’s degree from Grand Valley State University.

‘I Don’t Know How I Escaped’

When Curry was a child, her school relied on used materials set aside from more affluent schools. Facilities were old and lacked the resources available at higher-income schools. Many of her friends lived in the projects: the high-rise Robert Taylor Homes, which were similar to Cabrini Green. It was the 1970s and gang and drug problems were part of city life.

Territorial issues caused by gangs and union strikes that closed school for long stretches of time made just getting inside the building difficult at times. But she managed to stay on course.

“By the grace of God, I would hear of a lot of things happening and I was never there,” she said of the violence. “All these things would happen and I just wandered on my way.”

The recognition that she lived amid rough circumstances, but somehow was lifted out, influenced her whole life and is why she chooses to lead urban schools.

“I have always wanted to give back. I don’t know how I escaped,” Curry said. “My parents instilled that in me. You give back to your community.”

A protective and supportive family and a passion for music helped keep Curry focused and on the path to graduation and college. She lived in an apartment with her parents and four siblings. Her mother, a skilled seamstress, stayed home with the children. Her father worked two full-time jobs, for the railroad and as a mailman. Her parents had expectations for the children when it came to school. When her father said “Drill time!” it meant the homework had to get done.

She had mentors who helped her develop her singing talent and got her involved in the high school choir.

Curry attended North Carolina Central University for two years and graduated from the American Conservatory of Music in Chicago. She taught at Chicago parochial and public schools, and served as a music teacher and administrator in Holland Public Schools. She worked as principal at Muskegon Heights High School, another high-poverty school. She lives in West Olive with her husband, Donald Curry. They have four children.

“Kathryn has worked as a teacher and administrator in several high-poverty districts and has for many years witnessed the effects both in the community and in the classroom,” Superintendent Dave Britten said. “She has a deep passion for addressing poverty head-on by helping our staff help students overcome the obstacles they face every day.”

A Look at Poverty

For her master’s thesis, Curry touched on the shared circumstances of children living in poverty. Many live in single-parent families. Some are born into generational poverty. Others are poor as a result of a situation such as a lost job. Many have parents who are uneducated and have had unfavorable experiences with school.

But there is only one thing that all children in poverty have in common: they don’t have enough money. That often puts them into “survival mode,” she said.

“The poverty is so overwhelming to the family that they spend so much time in survival mode they don’t have time to prepare for school,” she said. Poor families must focus on paying for food and shelter, sometimes working three or four jobs. Long-range planning is difficult.

When they’re old enough, students often must work to help support the family, leaving less time for studying or extracurricular activities. Families have little knowledge of how to help their child apply for or obtain grants for college.

“I don’t think there is a parent in the world saying, ‘We don’t want our child to be successful,'” Curry said.

But it’s hard to know where to start.

Getting the Basics and Going From There

“The greatest challenge for most of our kids is that they start out behind, so they are always catching up,” Curry said.

Building relationships is also crucial, she said, noting that staff members and administrators do more than teach. They often provide transportation, clothes and groceries, and help students in whatever way they need. They focus on school as a way to improve students’ circumstances.

“We stress to our students that education opens many windows and doors to their future earning capacity,” Curry said. “It also is a road out of poverty and can change the course for future generations.”

Navigating the Way to Success

Staff members emphasize each student’s gifts, she explained. They encourage them if they have the makings of a good teacher, writer, nurse or engineer, and help them find their pathway.

They also help them apply for scholarships, grants and student aid; take them to college fairs and university tours; host informational nights to inform parents of possibilities. In short, they do “anything that makes them think outside of their situation,” Curry said.

She said the state needs to provide more funding to compensate for the different challenges faced by low-income schools. She also hopes for more after-school programs including tutoring and recreational activities.

“I want to get them not only to college, but through college, all the way through the four years,” she said. 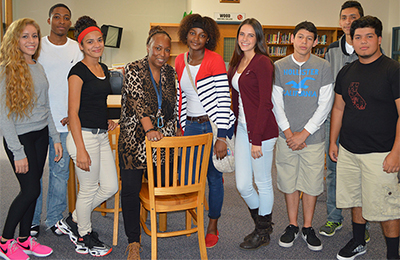 If she can do that, she will have met her life’s goal as an educator.

“Career-wise, I would just like to be known for making a difference,” Curry said. “I go to bed every night hoping I made the right decisions for my students and my staff. For students, I want to get them to graduation, to college and through college, and into a career that will be sustainable and will provide for themselves and their families.”

Read the full series – The Burden of Poverty: A Backpack of Heartache