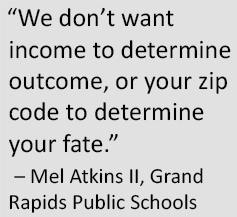 Editor’s note: This month, School News Network launches a continuing series on poverty in the schools and how it affects students’ learning. We will examine not only the problems poverty creates for students and their families, but the schools and strategies helping disadvantaged students succeed.

We begin the series with an in-depth look at Godfrey-Lee Public Schools, the poorest school district in Kent ISD.

In the Godfrey-Lee Public Schools district, poverty is not merely a political problem. It’s a daily reality of foreclosed homes, boarded-up businesses and families struggling to pay the bills.

Godfrey-Lee’s 1,900 students carry those realities into the classroom every day, heavier than a backpack full of books.

The small industrial enclave in northern Wyoming is Kent County’s poorest school district. Nearly 90 percent of students receive free or reduced-price lunches because of low family income. In this community, nearly 40 percent of its students live below the poverty line. Earlier this year, a national report named it as one of America’s most financially disadvantaged school districts.

For Superintendent David Britten, such findings are no surprise – far from it. Indeed, Britten is frustrated that despite his years of decrying the impact of poverty and inequitable funding on student achievement, so little is being done about it.

“The frustration is getting the right people to just sit down and debate it in the open, without political agendas,” said Britten, superintendent for six years. “I don’t profess to have all the answers. But there’s got to be real solutions to this problem.

“But nobody wants to sit down and debate it,” he added. “Nobody seems to have the political will or desire to do that.”

A series being launched today by School News Network aims to ignite the debate.

For the remainder of the school year and beyond, SNN will regularly feature stories on the prevalence of poverty among local students and how poverty hinders their learning. But we will also highlight schools and students who are getting excellent results despite daunting challenges.

Many of those challenges flow from the fact nearly 24 percent of Michigan’s children under 18 live in poverty – a number that continues to climb in the uneven recovery from the economic collapse of 2008. An almost equal percentage live in households with incomes so low they qualify for federal assistance through the school lunch program, said Ron Koehler, Kent ISD assistant superintendent for organizational and community initiatives and legislative affairs.

“Children who are hungry, who are without health care, who sometimes live in cars, shelters and in the homes of others, bring a backpack of heartache to school that makes it difficult to learn,” said Koehler, who encouraged SNN to undertake the project.  “This series will examine the challenges of educating children who do not enjoy the basic comforts of life and highlight a few of the extraordinary teachers, volunteers and devoted service providers who are helping these children overcome their challenges.”

Although poverty by no means determines academic failure, studies have long correlated low income with lower academic achievement. Yet few states have tackled theproblem in a committed way, says one education researcher.

“We’ve known for quite some time that poverty is probably the biggest predictor of student achievement,” said Sarah Winchell Lenhoff, director of policy and research for The Education Trust-Midwest, a Michigan-based nonprofit committed to raising student achievement and closing gaps. Poor children typically come to kindergarten already behind their wealthier classmates, and most schools “are organized in a way that exacerbates the gaps” between them, Lenhoff said.

However, she emphasized, “poverty isn’t destiny.” Research shows more effective teaching can dramatically close those achievement gaps. But it also shows low-income students and students of color are “disproportionately assigned teachers who are less equipped to teach them to high levels,” Lenhoff said.

SNN ranked the 20 school districts in the Kent ISD by the percentage of students who qualify for free and reduced lunches, and then compared their rankings on standardized tests: fourth-grade reading and math, and the high school Michigan Merit Exam (see related story). 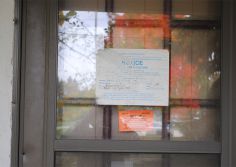 The local data adds to extensive research showing the poverty-performance correlation is “going in the wrong direction,” said Nick Ceglarek, superintendent of Hudsonville Public Schools, who has studied poverty’s relationship to academic achievement.

“We’ve got decades of research, so we know poverty does play a pivotal role in learning, and yet we’re not getting better at it,” said Ceglarek, who recently completed his doctoral dissertation investigating how Michigan’s Top-to-Bottom academic ranking system penalizes lower-income districts.

“It doesn’t seem like we’re addressing or acknowledging the strong factor that poverty plays in learning,” added Ceglarek, previously superintendent of the high-poverty Baldwin Community Schools. “To me, we have a responsibility to know and understand the research, put resources where they’re most needed and try to do all we can to mitigate that very strong factor.”

The poverty factor hits hard in Michigan, where some 700,000 jobs have disappeared since 2000, said Chris Glass, director of legislative affairs for West Michigan Talent Triangle, a consortium of area schools. Over that same period, the percentage of state students qualifying for free or reduced lunch has grown from 30.7 percent to 49.5 percent, Glass said.

“If you tell me the school’s free and reduced lunch population, I can 75 percent accurately predict their test scores,” he said.

However, Glass emphasized income is not an absolute predictor of performance, a fact borne out by the SNN analysis of local districts. Godwin Heights, despite having the second-highest percentage of free and reduced lunch, ranked fourth among 20 districts in fourth-grade math.

North Godwin Elementary’s strong academic record earned it a “Dispelling the Myth Award” in 2009 from The Education Trust-Midwest. Godwin’s middle school was just named a “Beating the Odds School” by the Michigan Department of Education for outperforming schools with similar students and challenges (see related story).

Godwin Heights is one of several districts statewide and nationally whose results prove that “poverty is not destiny,” said a researcher with the Douglas & Maria DeVos Foundation, which supports improvement efforts in Grand Rapids Public Schools.

“Some folks have figured out how to educate these kids,” said Edwin Hernandez, senior program officer. “The outlier in the performance is Godwin Heights. So the question becomes, what are they doing, and how are they doing it?”

And GRPS is tackling the problem two-fold. Staff is researching the reasons students aren’t attending – from snow-clogged streets in the winter to a lack of engaging teaching – and issuing “attendance challenges” for both students and parents. The district’s online Parent University (parents.grps.org) also hammers home the importance of good attendance with data and coursework.

Through this and other initiatives such as community tutoring, GRPS aims to help students and remove the barriers poverty presents for parents, Atkins said.

“With poverty, people are making choices, and the choices sometimes are survival choices,” Atkins added. “We don’t want income to determine outcome, or your zip code to determine your fate.”

Not Just an Urban Problem

In Cedar Springs’ 110 square miles in northern Kent County, just getting to school is often a problem. If a student misses the bus, a parent may have already taken the car to work – if there is a car. Many families don’t have internet service. Some double up to afford housing. Bills go unpaid.

One student missed several days because she couldn’t shower at home, where the gas had been shut off. Once they learned about it, school administrators let her use the locker room shower.

With many helping agencies 20 miles away in Grand Rapids, the Kent School Services Network brings needed services such as counseling and health care directly into the schools in Cedar Springs. Even then, some families are too proud to ask for help, KSSN workers say.

“A lot of people are living in new poverty,” said Jennifer Willette, a community school coordinator. “It’s like, ‘We’ve never had to ask for this before, and I don’t want to have to ask for it.’ “ 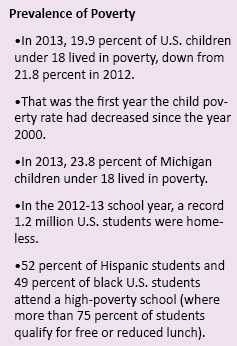 Nor are relatively well-off suburban districts free from poverty’s reach. In Rockford Public Schools, the free and reduced lunch rate has climbed to 13 percent from 5 percent in recent years, said Superintendent Michael Shibler. He attributed much of the increase to a post-recession economy in which more people are working part-time jobs or getting minimal raises.

“Obviously we have an issue. Any community has an issue,” Shibler said. “Does it tie to student achievement? Of course it does.”

Back at Godfrey-Lee, Superintendent David Britten continues calling attention to his students’ needs — and hoping someone is listening.

Earlier this year he held a press conference to push for more funding for disadvantaged districts like his.

“I’ve seen more and more kids, through no fault of their own, growing up in homes with parents struggling to make ends meet while working two or three low-wage jobs just to keep a roof over their heads and food on the table,” Britten said.

In his district, 75 percent of students are Hispanic, 15 percent are African American and 34 percent have limited English language proficiency. More funding should follow such high-risk students, Britten argues. Yet, he notes, the state’s allocation per pupil this school year is $7,251 — $223 per student less than in 2009-2010.

What difference would more money make? A lot, Britten and his staff found out. In 2010 the district received a three-year federal School Improvement Grant, providing $2,200 more per student for more teachers and instructional resources. District scores rose from the bottom of the state’s Top to Bottom list, to better than 63 percent of all other districts. The funds ended last year and scores “dropped like a rock” to the bottom 11 percent, Britten said.

“Funding does matter, especially when it comes to providing equitable learning opportunities for kids,” he said.

As for the district’s low county ranking on test scores, Britten cites poverty-related problems such as a high transiency rate of families moving in and out of the district. Students often arrive anywhere from one to three years behind, but have to be placed in the same grade as others their age. He advocates an ungraded system, a longer school year and better integration of technology and teachers. 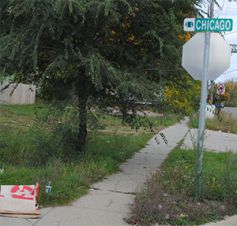 Still, he emphasizes, some students succeed, including those who have gone on to universities despite mediocre test scores.

“The test doesn’t say everything about them,” Britten said. “If they have grit and determination and family support, they’re probably going to be successful.”
(see related story)

Read the Full Series: The Burden of Poverty: A Backpack of Heartache

Effects of Child Poverty and Homelessness on Education