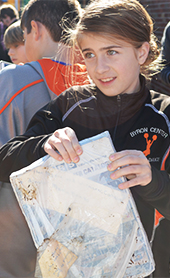 Also uncovered were the dreams and aspirations of 11-year-olds in letters they had penned to themselves.

The digging involved a sweaty session shoveling dirt to dig several feet deep. But eventually the 10 students from the former gifted-and-talented class hit the capsule’s cover. With a little heaving, they pulled up their time-worn treasure.

The October dig at the former Byron Center Middle School, currently the district’s Early Childhood Center, brought together classmates now living as far away as Texas who returned to rediscover their stowed-away items and get reacquainted.

“I wanted to see what was in it and go through the whole celebration of it,” said Julie VanderKooi, of Texas. “I think it’s very cool that we remembered.”

The sixth grade class of 1984 that was responsible for assembling the time capsule was a class that did research and some projects as part of their curriculum. The project aimed to give people today a glimpse of the past, which just happend to include current Byron Center sixth grade students.

Though memories were foggy about what they had put in the capsule, they speculated about what they would find, vaguely remembering Michael Jackson tapes and baseball cards.

Once opened, their recollections were confirmed and then some, with the lesson in ‘80s analyzing culture and lifestyle touching the next generation as well. 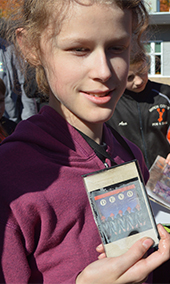 Struck by the difference in technology from then to now, they checked out unveiled video games of yore.

“Our sixth grade students learned that although they are very familiar with the technology and culture of present day, they started thinking about what life and technology will be like 30 years from 2014,” said Nickels Intermediate School Principal Tom Trout. “I think it made them think about how different things can and will be.”

Spearheading the event, Kyle Melinn, now a Lansing-area resident, had connected with his former classmates over Facebook last summer. They remembered stocking the capsule with teacher Cheri McKay, who died in 2010.

“We weren’t sure we’d be able to find it,” said Melinn, who attended with his 6-year-old daughter Frances. He smiled at the fact he is a parent, remembering he had assured his 1984 classmates he’d never have children.

Melinn and classmate Jacque Razmus remembered the spot they’d buried the capsule– on the current playground. With help from District Services Coordinator Doug Gallup, who had the playground equipment temporarily moved, they were able to locate it, but covered it back up to save the date for the class to lift it out of the ground. 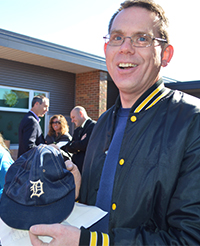 “Jacque put the spade right into it,” Melinn said

Memories Found and New Ones Made

After it’s removal, items were passed around and examined.

Nickels Intermediate School sixth grader Jackson Lee clutched the old moon boots. He said he would like to bury a time capsule to open in 2044.

“I’d probably put in some University of Michigan posters and a pair of Under Armour shoes,” he said.

Pat Eining came with his childhood Detroit Tigers baseball cap in hand. Teacher Cheri McKay had bet him that he wouldn’t still have it in 2014. He read his letter to himself from 1984. 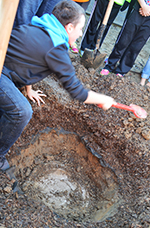 “I was going to play for the Tigers and then be a base coach,” he said, waving his cap.

Trout said the event gives current students a sense of perspective.They also started asking about the possibility of burying a time capsule of their own. This time, with enhanced water-proofing technology to keep things better-protected.

“It’s cool that they can see the end result of preplanning. Maybe they will want to do their own or something similar,” he said.