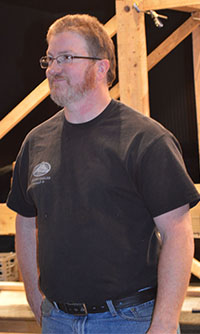 The wooden structures stood sturdy in Wyoming Public Schools’ Dan Heintzelman auditorium. Greg Brooks and a crew of workers added final pieces to what would become main character George Bailey’s house and the iconic bridge in, “It’s a Wonderful Life.”

In the next few weeks, Brooks will lead construction of 11 other set designs, from front steps to a bank and a pharmacy, for scenes in Wyoming High School’s 7 p.m. Dec. 3-6 take on the 1946 Christmas fantasy classic at 2125 Wrenwood Blvd. Director Jeremy Schnotala knows come showtime, his students will have the perfect setting for a Christmas miracle to unfold, and much of the credit goes to Brooks.

As he has for the past four years, Brooks was setting the stage for students to make their show explode with vibrancy. By providing the timber bones of the three-dimensional sets, cackling witches, surfacing sea maids, dancing candles and animated clocks have performed in magical fashion.

Brooks, whose daughter, Megan Brooks, is a 2014 graduate of Wyoming High School, devotes every weekend and many weeknights for nearly two months prior to a show. He logs the hours as a volunteer simply because he wants students tohave a wonderful setting to develop their acting chops or technical theater skills.

“I don’t mind dedicating a lot of time,” said Brooks, who was named Wyoming Public Schools Volunteer of the Year in 2014. “The kids get a big thrill out of it.”

The students can take the sets Brooks’ builds and let their imaginations go wild, with paint, fabric, snow, glitter, whatever fits the scene. That’s not possible with a basic backdrop. Brooks has worked on shows including the musical, “The Wizard of Oz,” “Beauty and the Beast” and “Spamalot” demonstrating that a twister-torn Dorothy’s house and a castle in Camelot are best in 3D.

“For me it’s a lot of enjoyment,” said Brooks, who works in machine testing at Burke E. Porter Machinery Company, which specializes in vehicle test systems for the automotive industry.

His daughter, Megan, said her father’s skills first shined during “Wizard of Oz,” when Brooks joined former set builder Mike Francois as a volunteer. Though the auditorium lacks the mechanisms to allow actors to fly by cable, a witch

“A lot of people commented it,” said Megan, who worked on the lighting crew for several productions.

But Brooks was tight-lipped about his methods.

“Well, I can’t tell my secrets!” he quipped.

Megan said her father’s time means a lot to the students.

“It gives the actors and the crew a more authentic experience with theater,” she said. “I can be a part of seeing how it all comes together.”

To Schnotala, Brooks is the creative genius who accommodates his whims. The sometimes cantankerous director nominated Brooks as Volunteer of the Year because of his ability to make things happen.

“It’s not easy to work with me because I have high expectations and demands,” said Schnotala. “Greg is so easygoing and creative. Pretty much anything I come up with he can do…He’s very bashful about people saying how amazing he is.”

He said Greg is a great collaborator, offering solutions and getting parts from work to make things possible in an auditorium built in the 1970s. He is also a master at reuse. Old fencing provides good wood; he knows how to use discarded odds and ends and gadgets and gizmos. He can lift things, hinge things, make things split in half.

“I’ll tell him I need to fly a person and he’ll be like, ‘I think I have a hydraulic system,” Schnotala said.

He came up with ways to use to use fog to make the Wicked Witch of the West melt, the Beast transform into the Prince, and Lady of the Lake emerge out of blue waters. He brought the Vegas “Camelot” in Spamalot to life with light-up signs, giant dice, and a spinning wheel of luck.

“Basically, he never says no to any crazy idea I tell him I want for a show,” Schontala said.

For “It’s a Wonderful Life,” Brooks said he’s not working on anything too tricky, though he failed to mention the extent of the project: a baker’s dozen movable sets including doors that open and close and the two-piece bridge, remembered as where snow falls hard on Jimmy Stewart.

Plus he never knows what Schnotala will come up with.

If it’s the moon Schnotala and his cast and crew want, Brooks, in the words of George Bailey, is sure to throw a lasso around it and pull it down.

Or at least make it look that way.