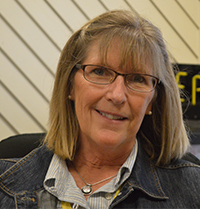 The 2014-15 school year will no doubt be memorable in both very good and very bad ways for Chad Conklin. Not only is it his first year as Godwin Heights High School’s new principal, it’s also when he and his family received an outpouring of care from the school community following his son’s accident with a lawnmower.

“It was never my goal to become a principal but I love the job, the interaction I have with the students, staff and the administration,” he said. “The support we’ve received following Carson’s accident is just evidence of how amazing the Godwin heights community embraces adversity and steps up to help each other when a colleague needs help.”

Conklin’s direction in life changed July 24. That’s the day he was mowing the grass with his riding lawn mower. Without his knowledge, his six-year-old son, Carson, ran toward him while he had the mower in reverse, pinning Carson under its deck.

In a moment’s time, the boy’s right arm was broken in two places, his arm’s artery was severed and his back was compressed, losing his ability to walk. His right hand lost its ability to function.

In an instant, Conklin’s priorities changed. He spent his evenings with Carson, first at Helen DeVos Children’s Hospital and later, Mary Free Bed Rehabilitation Hospital, while his wife of 11 years, Dana, took care of their two other children at home. It was clear to Conklin his work as a coach and athletic director had to come to an end. He accepted the principal position.

Despite his intention to remain in teaching and coaching, he remembers his mother urged him to go into administration even as a boy. “She always told me I needed to become a building administrator,” said Conklin. “I said I wanted to be a teacher, and a basketball coach, but I never saw administration on the horizon.”

“We looked around our options and it made sense to rely on his skills and knowledge of where the high school should go,” said Fetterhoff. “He really is a strong supporter of who we are and what we need to do to improve.”

A Man of Integrity

“He’s a man of integrity,” said Carlyle. “We’ve all walked along side of him and supported him, both the teachers and the student body. He’s given us this sense we’re all in this together. He’s asking a lot of us but no more than what he’s asking of ourselves and probably more of himself.

“I’ve never seen the student body come behind someone like this.”

Conklin said the support he’s received from administrators and teachers as the high school’s new principal makes all the difference. “The transition to principal has been fantastic because of the support of Superintendent Fetterhoff and the teachers,” said Conklin. “To know I have the support of them is extremely important to me.”

Conklin has worked in the district for 16 years, 11 of them as an elementary teacher and, for the last five, as its athletic director. He also was a dedicated varsity basketball coach, whose accomplishments include Grand Rapids Press Coach of the Year 2014 and Basketball Coaches Association of Michigan Class B Coach of the Year 2013 and BCAM Regional Coach of the year 2012, 2013 and 2014.

“The representatives of the City of Wyoming would like to thank-you for being such an exemplary citizen of our community,” reads an April 2014 letter from members of the Wyoming City Council. “We thank you for being a leader at not only Godwin Heights Public Schools, but also the overall City of Wyoming.”

“I loved my job as a basketball coach and athletic director and I didn’t want the players and my staff to feel I was letting them down,” said Conklin. “With my son’s situation, I had to reprioritize my life. My son came first. I knew I could focus on being a principal and a father. And to be honest, I had the voice of my mom in the back of my head.”

Support Was Quick to Come

After the accident, members of the school community quickly stepped up to help. The staff provided meals, donated money to help pay for hospital bills and provided a freezer to store frozen meals. The aid didn’t stop there. Many made visits to the hospital and Carson was showered with gifts and get-well cards.

Carson has since returned home. He’s regained his balance and ability to walk. Because the nerves in his right arm and hand were stretched and not severed, he is regaining movement and function in that part of his body as well.

Conklin said his new position as principal and the support he’s received during his son’s recovery has been amazing.

“It was never my goal to become a principal but I love the job, the interaction I have with the students, staff and the administration,” he said. “The support we’ve received following Carson’s accident is just evidence of how amazing the Godwin heights community embraces adversity and steps up to help each other when a colleague needs help.”

Once quiet, now the leader of the pack