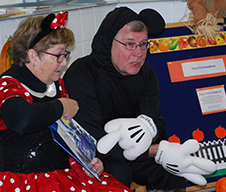 One spoke about his work in Africa as a meteorologist and outreach to women and children affected by HIV/AIDS. Another talked of his research on undiscovered planets as a Harvard-educated astronomer at M.I.T. And the retired owner of an elder care facility read to students dressed as Minnie Mouse.

All were honored recently in a weekend of events celebrating nine new inductees into the Rockford Hall of Fame. It was the third class of inductees so honored, following previous inductions in 2010 and 2012.

Activities included a “Day of Learning” in which the Hall of Fame members shared their expertise with Rockford students. Presenters included Derek VanDam, the meteorologist; Zachory Berta-Thompson, the astronomer; and Susan Bodenner, the former elder-care facility owner and cartoon-friendly reading advocate.

All took part in ceremonies around a monument at Rockford High School etched with inductees’ names. They also were recognized at the Friday night football game, and formally inducted in a Saturday night dinner at Frederik Meijer Gardens & Sculpture Park.

The new inductees are:

Sue Bakita taught in Rockford schools from 1963 until her retirement in June. A middle-school history teacher, she was named 1991-92 Teacher of the Year by the Michigan Association of Middle School Educators and helped develop a mentor program for district teachers.

Zachory Berta-Thompson, a 2003 Rockford graduate, is the Torres Fellow for Exoplanetary Research at the Massachusetts Institute of Technology. With degrees from Princeton and Harvard, he searches for planets outside the solar system and is helping NASA find planets around the brightest stars.

Susan Bodenner, as co-owner of Bishop Hills Elder Care Community, initiated intergenerational reading programs between its residents and local students. She has been active in literacy projects with Rockford Rotary, in honoring military personnel and installing safe-water systems around the world.

Dana Mambourg Zimbric, a 1996 Rockford graduate, is artistic director and conductor of the California Chamber Orchestra.  She champions music education for children and conducts an adult ensemble that performs for nearly 30,000 students annually in San Diego County.

April Soderstrom, a 2002 Rockford graduate, owns a jewelry line that has been featured in national magazines and has been worn by several Miss USA pageant contestants. She is also an interior designer specializing in hospitality design including restaurants and vacation homes.

Derek VanDam, a 2001 Rockford graduate, has been chief meteorologist for a South Africa news channel and works with The Compassionate Life Foundation to help children and widows in Swaziland affected by HIV/AIDS. He recently was hired by CNN International.

Michael Zevalkink, a 1967 Rockford graduate, had a 33-year career at Ford Motor Company culminating as executive director of Ford’s Performance Group. He was chief program engineer in bringing the redesigned Mustang back for its 30th anniversary in 1995.