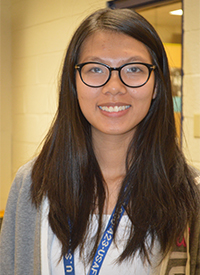 A defining moment for Linh Le, who spoke no English when she started eighth grade at Kelloggsville Middle School, was her mastery of the math constant Pi.

She rattled off about 150 of the digits following 3.1415– stopping at times to translate mentally from Vietnamese to English — sealing her spot as champion during a school Pi contest.

“I love math. I think math helps me feel confident about myself,” said Linh, who climbed her way to tenth in the class after just a year in the district. She is now ranked third as a senior, with a 4.26 GPA.

Following weeks of feeling isolated, there were other remarkable instances when things clicked for Linh, like during a social studies class test review when she answered a question correctly and raised the eyebrows of classmates who had underestimated the quiet student.

She then knew she could make it academically as a new American student. “I was very, very happy,” she said.

But it wasn’t until the annual Kelloggsville Community Pride festival her freshman year that Linh felt she truly fit in. She had volunteered to paint children’s faces, and her artistic ability resulted in many “oohs” and “aahs”.

“I felt like I did something great that day. I wanted to continue in getting involved in school and giving more after that,” Linh said.

Linh and her parents, sister and uncle’s family immigrated to the United States from Vietnam when Linh was in eighth grade. She was a driven student in the country where school requires extra classes outside of the school day.

She now lives in a mobile home with her father Hung Le, who works at a carpet business, and mom Truk Huynh, a manicurist. She said her family provides her a lot of support and encouragement.

“Hard work is something I learned when I was young,” she said. “Especially because I’ve grown up in a poor country and seen so many things in society, I am probably more mature than most people my age.”

Her family had waited years to receive approval to move to the United States, 10 years after her grandfather had immigrated here. Linh was happy in Vietnam, with her friends, studies and selling vegetables at markets.

“I was really sad to leave,” she said, describing feeling carsick on the long drive to the U.S. Consulate in Ho Chi Min City to sign papers, finishing her midterms in Vietnam, and saying goodbye.

But four months later, she arrived, facing the daunting task of school in a new country.

“I never imagined myself to be able to speak like this. I didn’t understand a word the teacher said. I felt so isolated,” she said.

Testing Out and Giving Back

The small sparks of confidence Linh felt as the days passed led to bigger things. She tackled academic challenges head on, testing out of Algebra I, Precalculus and Civics and taking summer classes to make room for higher level classes. She became a skilled artist, winning a Michigan Art Education Association state award. She was the runner-up on the varsity tennis team regional championship last year.

That’s an understatement. English teacher Susan Faulk said Linh prepared for the ACT exam, which is taken at 8 a.m., by waking up early on summer mornings to take practice tests, syncing her body with the schedule.

“If I could only pick one adjective for Linh, I would choose hard-working,” Faulk said, “Linh has been given many gifts, but she works really, really hard on constantly developing those gifts. She spends her days, evenings, weekends, and vacations studying, drawing, painting, playing tennis, and serving others. She is determined to better herself in all areas of her life, and she is not afraid to put in the time it takes to do this,” Faulk said.

But while teachers and peers noticed Linh’s focus as a student, it’s her willingness to step up as a leader that really struck them, Faulk said.

“One of the things that differentiates Linh from many other high-achieving students is her selfless nature,” Faulk said. “Linh spends a lot of time developing her gifts, but she also uses her gifts to serve others.”

“I think what really helped me the most was trying to volunteer and communicate with people. I know a lot of students who need a tutor, so I helped them. While helping them, I also picked up words. I learned to how to explain the subjects to them … I really like volunteering. I learn so much every time,” she said.

On Monday evenings, Linh helps other people learn English like she did. She volunteers at the district’s Parent Education Program, where non-native English speaking parents take lessons from English Language teachers.

“I can totally relate to a lot of them because my parents can’t speak English. I know how important it is to learn English,” Linh said.

Linh volunteers at Women At Risk International, an organization that seeks to rescue women from human trafficking; she helps teachers by translating, making posters and signs for special occasions, wraps plastic on books, helps to run school-sponsored events, and she teaches elementary students how to paint and draw.

She is involved in National Honor Society, Art Club, and helps other students develop leadership skills as a leader in the school program Rocket 30.

Linh is applying to several colleges and hopes to pursue engineering, pre-medicine or psychology.

“Linh Le is going to make a difference in this world. I love the way she uses her gifts to serve others,” Faulk said.

Cook’n up the dance moves

Leading with strength, consistency and love

A multi-year initiative, District Equity and Scholar Success Team, will work to embed equity practices into all areas of education...