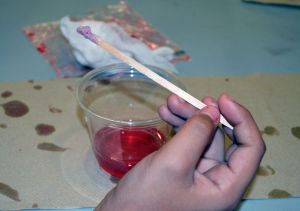 “Oooh, it feels gross!” said Katherine Love, a Discovery Elementary student, as she jabbed the gunk.

The girls weren’t just playing with their food, but performing a precise strawberry dissection that involved learning about the long thick fibers that store information for the functioning of the chemistry of life.

“That clumpy stuff that looks like snot is the DNA from the strawberries,” explained Erin McNally-Goward, a Grand Valley State University adjunct professor of biology. “Take your wooden stick and now you can play with the DNA.”

“I never knew you can do that,” Jocelyn Geemes, an Endeavor Elementary student, as she distracted the material from the fruit.

The students were among about 100 girls from Endeavor, Discovery and Explorer elementary schools delving into the work of scientists, mathematicians, computer programmers and engineers at the “Girls Only” STEM (Science, Technology Engineering and Math) event organized by Nancy McKenzie, the district’s STEM coordinator.

Girls tested the buoyancy of diet versus regular soda, created the best-tasting chocolate pudding, and watched a soapy mixture go up in flames. An East Kentwood High School counselor and high school students also worked with the girls.

The purpose of the “no boys allowed” event was to pique girls’ interest in traditionally male-dominated jobs. Women are under-represented in STEM careers, and learning from professional females who work in those fields shows girls that many possibilities exists, McKenzie said.

“We felt it was necessary to make our girls aware of what is available to them in school as well as the workforce. We want to empower them to believe that they can do anything they set their minds to and help them relate what they learn in the classroom to real-world opportunities,” she said.

According to a 2013 memo from the Executive Office of  President Barack Obama, women represented 24 percent of the STEM workforce in 2009. Women earn on average 33 percent more when they work in these high-growth fields compared to other industries.

“We want our girls to see themselves as capable in these areas before those stereotypes set in,” she said.

As keynote speaker, engineer Stacey Payne-King, told girls about being a woman in her field. She wore a pink shirt that stated “Mechanical Engineer.” She talked about the bias she has faced.

“If you didn’t see that shirt would you think I was an engineer?” asked Payne-King, owner of Kings’s Engineering and Technology. “Guys are surprised.”

Payne-King, whose daughter is in fourth grade at Discovery Elementary School, said she was great at math as a child, but didn’t realize it.

“I wanted to do things, but I didn’t have people encouraging me to do them,” she said.

But her father and her algebra teacher knew she was talented, and pushed her to join a math team even though the teacher in charge resisted. Once she was allowed to compete, she placed second. She went on to take advanced math courses at an early age and tutored junior college students at 14 or 15 years old.

She told girls to speak up, embrace challenge and know they are as smart, capable and have the same rights as boys.

“You be my future STEM! I need you in the workplace,” she said.

“Science is something that’s always been fun for me and I think girls don’t get exposed to it at an early age enough,” said Roloff, a 2007 East Kentwood High School graduate andCalvin College graduate. “Science teaches you a different way to think about the world, as questions and never stop asking questions.”

“You actually end up learning about stuff that you didn’t know before,” she said “A scientist seems like a really fun job.”

Around the world in seven holidays