Godfrey-Lee Director Made Musicals Possible With No Budget, No Auditorium 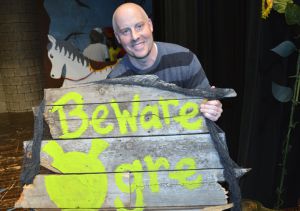 Lee High School senior Gabby Estrada peeked out from under a feather-adorned witch’s hat during rehearsal for “Shrek the Musical,” and looked at her friends and fellow actors busy practicing lines and singing songs.

She played the Wicked Witch of the West and Mama Ogre in the show about a grumpy green ogre who finds love in a land of fairy-tale creatures. She and other students were thrilled to have the chance to act and sing onstage.

“The play is a really fun place to come be a different person for a little while,” she said. “Everyone can learn something good here.”

Gabby’s statement is more meaningful than it may appear. For more than 15 years, students went without a play or musical in Godfrey-Lee Public Schools, the smallest and poorest district in Kent County. This is the first year the district allocated the drama program a budget, $7,000, for the show that took place on the high school gymnasium stage.

The little Wyoming neighborhood is not a place where taxpayers and wealthy donors have built a professional-sized fine art center, or where a bond issue has funded a mixed-use gymnasium that converts into a huge auditorium. Students don’t often go to Broadway plays or join extracurricular theater companies. Many have never seen a professional play.

Still, the young actors took on the roles of a talking donkey, a squeaky-voiced Pinocchio, a trio of visually-impaired mice and many other magical characters. They rehearsed behind a curtain, with basketballs bouncing and whistles blowing as teams practiced on the other side. Sharing facilities is something they just accept, like the broken knobs on the decades-old light board they still use to illuminate the stage.

Six years ago, district media specialist Kelly McGee, a lover of theater, and Dan Townsend, director of technology, wanted to give students a chance to have a musical. Naysayers told them there wasn’t enough talent, interest, or adequate facilities. Plus, there was no money for a production.

“There were people who doubted us. We had no budget, so we knew it was going to be a little rough, but we thought it was important that the kids to have this experience, that they were able to get out on stage and perform for their peers and sing,” McGee said.

So they made things happen.  Former Principal Pete Foote lent $800 from the high school budget to pay for the license to perform “Grease.”

“The rest was all, ‘what do you have at home?’ Area businesses donated costumes and props, with many volunteers pitching in, staff members built props like a car out of styrofoam and organized the student show,” McGee said.

“Grease” took off like lightning, and when put to the task, students shined.

“We found so many kids were these wonderful singers, and they were just waiting for the opportunity to showcase it.”

People filled the gym to watch.

“We sold out within three hours for the student show. It was like 500 kids packed in here. We had to take the bleachers out. We started the show and it was just awesome, You could feel the energy,” McGee said.

From there, the drama crew made enough money from ticket sales, to pay back Foote, and stage more productions including “Hairspray,” “Night of the Living Dead,” “Willy Wonka” and “Beauty and the Beast.”

Directing the show is a joy, said McGee, who was involved in theater in college. He co-directs with high schoolteacher Rosana Tocco.

“I think the reason I decided to start it is because none of the students were having that experience that I had, to get on stage and have the lights come up,” McGee said, “There’s something happens to you. There’s a confidence that builds. These kids weren’t getting that opportunity, and they do get it now.”

He now sees the results of giving students a chance every year.

“They will have an audience of 500 people out there. The curtains will open and they will perform wonderfully, and they will be transformed. They really will. It’s absolutely amazing what it can give students at Lee that they probably never had.”

Seeing the Talent in Each Other

For the students, it’s all about supporting and encouraging one another. Gabby pointed to Eduardo Montiel, a sophomore, who played Lord Farquaad, a major role in “Shrek.” She described him as extremely timid when he first got involved in theater during “Beauty and the Beast.”

“Eduardo was such a shy kid. Last year, during “Beauty and the Beast,” he was going to be in a minor role, but the lead dropped out, so he took on the role of the beast. It’s cool to see a shy little kid like that in a major role,” she said.  “Now, he expresses more feelings. He’s more open.”

Eduardo said he became comfortable because of the atmosphere and camaraderie he felt.

“It was the community, the people. They were supportive of me. They don’t judge,” he said. “People are very kind…. We work with what we have.”