Soon after arriving at Harvard University this fall, Kanon Dean realized he was going to have to buckle down big-time in order to hack it at the prestigious Ivy League school. But having graduated as valedictorian from Lowell High School, Kanon knew he had been prepped just as much for the academic challenge as he had for the Harvard wrestling program.

“My parents were big in elementary school on establishing a work ethic, not just telling me to go study but teaching me why school work was important,” said Kanon, the son of football coach Noel and Jill Dean. “It was just expected I come home with a report card I was capable of.”

No doubt that expectation was a big reason Kanon graduated last spring with a 4.467 grade-point average, highest in his class. But that distinction made him unusual among the male graduates of Kent County’s 20 public school districts.

Of the 260 top 10 seniors in Kent ISD high schools, 60 percent were female and 40 percent male, an analysis by School News Network found. Girls in their schools’ top 10 outnumbered boys in 12 districts, compared with four districts in which boys took the lead. In three districts, girls outnumbered boys nine to one (see chart).

So are girls in Kent County just smarter than the boys? Unlikely. For a variety of reasons, female students nationally outperform their male counterparts on several fronts, from high school GPAs to college degrees. The analysis of Kent County top achievers did not surprise a Michigan State University scholar.

“I think it’s pretty typical that girls are getting higher grades,” said Angela Calabrese Barton, an MSU professor of teacher education who studies gender equity in science education. “This gap has been growing for several decades.”

Indeed, while gender inequalities still persist in society, women now out-perform men academically at every level of school, according to “The Rise of Women: The Growing Gender Gap in Education and What it Means for American Schools,” published in 2013 by the Russell Sage Foundation (see related story).

Calabrese Barton says it’s not that boys have seen a downturn in academic achievement, high school completion and college-going rates, but that girls have dramatically improved in all these areas.  “It sort of reflects the women’s movement of the Sixties and Seventies, and the broader social acceptance” of women’s pursuit of college degrees, she said.

Further, while about as many boys from higher income families go to college as girls, historically it has been a different picture for working-class and lower-income boys, Calabrese Barton said. Many were trained to believe they didn’t need good grades, because often they could get good jobs even if they dropped out. That’s no longer the case, especially in economically depressed states like Michigan. “Women don’t share that thinking,” she added.

Related Story: Girls vs. Boys in School: A Growing Gap

While women have overtaken men in college-going rates and college degrees in recent decades, K-12 school girls have outperformed boys for nearly a century, studies say.

One of the most comprehensive is “The Rise of Women: The Growing Gender Gap in Education and What it Means for American Schools,”  Authors Thomas A. DiPrete and Claudia Buchmann note that in 1960, more than twice as many men as women ages 26-28 were college graduates. Read Full Story

Susan Lamb surely doesn’t. The Kenowa Hills High School valedictorian has always done in well in school, though she says her parents never pressured her. Now a freshman at Wheaton College, Susan earneda 4.174 GPA at Kenowa, was president of the National Honor Society and active in sports and music. She is majoring in geology at Wheaton.

Susan was skeptical that the Kent ISD top 10 analysis says anything about male and female achievement, saying she would like to see if figures over a longer time showed a different result. Further, being valedictorian doesn’t necessarily mean she was the smartest in her class, she stressed: “There are so many different types of ‘smart,’ and I don’t think GPA fully embodies that.”

At Kenowa, she says, she did not observe that girls on the whole were more serious about their studies than boys.

“Just from my limited perspective, it’s not necessarily a matter that girls are naturally smarter,” said Susan, the daughter of Dave and Brenda Lamb. “Maybe they’re just motivated by sticking to the social norms that they’re expected to do well.”

Some Kent ISD administrators were surprised by the top 10 survey — and weren’t sure what to make of it. Kent City, with seven boys in the top 10, was one of only four districts where boys outnumbered girls. However, over the past 10 years, 58 percent of its top 10 students were female.

“I’m not sure what it means,” said Superintendent Mike Weiler. “I can’t say girls work harder or are smarter.”

However, Weiler said it is interesting that more women earn college degrees now, suggesting the pendulum may have swung in their favor. Behavior may also be a factor in grades, he suggested, noting far more boys than girls come before his school board for discipline issues. But he believes fewer boys think it’s “uncool” to get good grades than used to be the case.

The massive loss of jobs at places like General Motors, where many once worked at the now-demolished 36th Street SW stamping plant, and the rising cost of college has heightened parents’ awareness that their kids need to excel in school, he said. “’You need to do well, otherwise how are we going to afford to send you somewhere?’ Maybe that outweighs, ‘Why are you taking all your books home or trying to be so smart?’”

At Northview High School, nine of the top 10 seniors in GPA were female. Over 10 years, 64 percent were girls, and in no year did boys outnumber girls. Principal Mark Thomas said he was not surprised. In fact he is happy to see girls doing so well, when some worry whether they are taking enough initiative.

“I’m pleased we’ve seen an increase in females” achieving excellence while pursuing a variety of careers and courses, Thomas said. “But it also tells me we always want balance. We want to push all kids.” He noted 90 percent of the senior class leadership positions are also held by girls.

Noting that the school’s two National Merit Finalists are boys, Thomas said he would like to see data comparing other measures such as ACT scores, as well as more study of how comfortable boys and girls are with different teaching styles.

GPA Not Only Measure of Achievement

In Wyoming, where nine of the top 10 senior GPAs also were girls, Superintendent Tom Reeder said it is typical for girls to outnumber boys on that list. His own senior class 30 years ago had seven females and three males in the top 10, he said. But GPA is different from knowledge or demonstration of it, heemphasized.

“Girls tend to be more compliant in society and school,” reflected in their lower numbers in crime or school discipline cases, Reeder said. “This pays off in school because of the way grades are obtained.”

However, girls don’t dominate in Wyoming MEAP tests. For the past two years, girls outscored boys in 11th grade reading and writing, but boys were higher in science, math and social studies, he said. Further, both genders perform comparably in Advanced Placement courses and college-going rates, he noted.

Reeder said he doesn’t worry about boys’ academic performance but that all student groups are continually monitored. “Schools and districts are looking for avenues to improve male motivation and desire to improve in the literacy areas, as with females in the math and science,” he added.

Back at Harvard, Kanon Dean was grateful his parents always emphasized the importance of school and work ethic. Those good habits served him well as he hit the books in economics and government while fitting in wrestling practice. 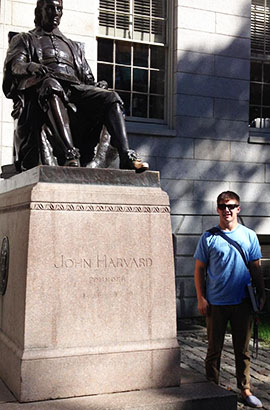 Kanon was a two-time All-State wrestler at Lowell, and as captain led the team to a state championship last winter. Son of football coach Noel Dean, he earned Academic All-State honors in both football and wrestling.  Though he was always passionate about sports, he says he never lost sight of his school work. But other students may neglect their studies in pursuit of sports glory, he said.

“People may say, ‘This is how I’m going to get into college, this is what I care about.’ That is a great goal, but maybe we lose track of our academics.”

To do well in school, most males need the kind of role models he was blessed with, Kanon said.

“I firmly believe what motivates people is other people,” he said. “If you look in communities where there’s a trend of guys not doing as well, it’s a self-fulfilling prophecy. (Boys) need a teacher who’s a strong male role model, or a basketball coach who invests time in a study table.”

As for the “uncool to like school” factor, Kanon said it never bothered him much.

“There’s always going to be that little bit of, ‘Hey, he’s a nerd,’” he added. “But the culture in Lowell is it’s cool to be a great student.”

Why Are Girls Beating Boys in Academic Achievement?