Steve and Nora Faber want their kids’ education to be something special so they chose the dual English Spanish Immersion program at Southwest Community Campus.

They liked that their two boys would begin learning the Spanish language and culture long before attending college as they had. They also liked the idea of being part of the renewed energy that has emerged at Grand Rapids Public Schools, and part of the city they love.

The Fabers, who live in Grand Rapids’ Belknap Lookout area, were some years ago among a group of neighborhood parents who collectively decided that sending their kids to the neighborhood school was as important to their community as it was to their kids’ education. The Fabers say their decision was not a mission; it was about doing what’s best for their kids.

“When we moved in the district, it was starting to talk about closing Coit, and we could see how important that little neighborhood school was to our community and its future,” Steve Faber said. “We always said we wouldn’t sacrifice our kids on the altar of urban education but after we saw the opportunities that GRPS was offering, it was just a great fit.”

“Once I was there, I realized I would stack up any Grand Rapids Public School elementary school with any school anywhere,” he added. “People feel like in some way we’re sacrificing something to make this choice, but as parents we wouldn’t do that; we’re doing it because our kids are getting a really great education.”

The Fabers are seen in videos the district has produced as part of a new promotional campaign aimed at spreading the good news about the range of choices and programs offered by the Grand Rapids Public Schools. The district this fall launched the “We Are GR – We Are Proud Parents” campaign to tell the story through the experience and choices of the Fabers and other parents.

District spokesman John Helmholdt said West Michigan will see an impressive array of ads on cable and network television, on radio and billboards and in print. Coinciding with the ad campaign will be an aggressive ground team of paid consultants who will be out in public sharing the district’s story with Grand Rapids residents.

The district’s spending plan for this school year specifies an ad budget of $261,547 for the campaign, a $114,477 increase over last school year. A large part of that will be spent hiring a consultant to assemble a team with political experience to promote GRPS at neighborhood association and other community gatherings.

For Bryan Bickford, another GRPS parent offering testimonials for the district’s campaign, that kind of personal recruitment is meaningful. Bickford and his wife, Nancy Haynes, said they made a conscious choice to commit to Grand Rapids Public Schools, enrolling their kids at C.A. Frost Environmental Science Academy and the Center for Economicology. 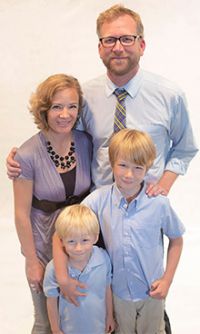 “The kind of targeted word of mouth they’re talking about may be more difficult, but for the most part it’s invaluable; you can’t buy that kind of advertising,” said Bickford, who works in marketing at Grand Valley State University.

For those remaining unconvinced, Stacy Stout and other parents recommend visiting district buildings and talking with parents whose children attend schools they’re considering. Parents who do may find themselves sticking around awhile, they say.

“Go into the buildings, meet the administration, meet the teachers, take a tour,” said Stout who enrolled her daughter at Grand Rapids Montessori three years ago. “They’re very open to that. Treat it like you would when you’re going to college. You want to visit the campus because you’re going to be there awhile.”