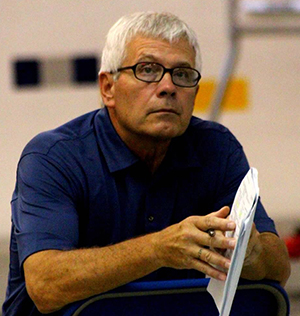 But it’s the ripples Briggs has spread from the pool into the school and community that his swimmers remember best, and they cover 40 years.

Briggs has a legacy that dates to when he started as varsity coach in 1974. He has since led the swim program to 10 boys’ and 19 girls’ state championships. The1978 girls team was the first women’s team at East to win a state title.

“It’s been 40 years of enjoyment,” Briggs said. “I get to interact with a variety of people on a year-to-year basis. Even though it seems like it’s doing the same job every year, all the athletes change and all the parents change. Each class has its own personality, and many athletes between ninth and 12th grade go through a lot of changes.”

Briggs will be forever linked to East Grand Rapids swimming. The community recently named the high school pool in his honor at a dedication ceremony, an experience he called “overwhelming but phenomenal.”

Plus, Briggs plans to stick around for awhile longer as coach.

“It’s still the best part of my day, and as long as that goes on and they will have me, I’d like to continue,” he said. “I feel so blessed to have been able to do this. I’ve always felt like the Lord wanted me to be a coach and I’m supposed to be here.”

Boys team captain Michael Lundquist said Briggs gets to know all of his swimmers, helping them grow into well-rounded adults.

“He’s definitely helped mold a lot of good people,” Lundquist said. “Butch is the best coach I ever had. He’s kind of like a godfather or another grandfather. He’s always there to give advice, and he pushes you just as much in the classroom as in the pool.”

“He’s super awesome and supportive,” added sophomore swimmer Gabby Higgins. “He believes in every single one of us. He makes us all confident in ourselves and that really helps us.”

“Those kids taught me how to relate with kids,” said Briggs, a retired Ottawa Hills High School physical education and English teacher.

By 1973, he was assistant swim coach at East before he became varsity coach. Over the years, he’s helped develop many champion athletes. But for Briggs, it’s always been about more than championships and race times.

“Swimming fast is not the most important thing,” he said. “Developing as a person is more important, and if you do that, quite often you develop as an athlete.”

“A lot of times when a swimmer comes in as a ninth-grader they are very unsure and unaware. Hopefully when they leave as a 12th-grader, they are very confident and a caring person.”

East Grand Rapids High School guidance counselor Lori Johnston, who swam for Briggs in the 1970, remembers his impact well. She still tells her students a story that begins with “My coach told me …”

As a senior, Johnston struggled in deciding where to go to college. Briggs told her, “Whatever you choose, you will be happy. You will make the right decision.”

“For 28 years, I have told that story,” she said, tears filling her eyes. “He has a way of investing and building relationships that go well beyond swimming.

“Butch is steady and solid and a great listener. He has and always has had a knack for perception. He understands what’s going on.”

“We don’t know how Butch does it,” Allaben said. “That’s the magic and the mystery of it. But he makes every kid on that team feel like they matter, whether they have never been a swimmer or a phenomenal swimmer. He makes them all feel like they count.

“He brings out the most amazing qualities in these kids. He’s just unbelievable, and they love him.”