Students Learn All About Stayin’ Alive with CPR 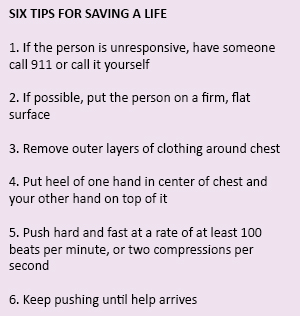 Fireman Casey Quinn grabs his phone, takes a call from a student a few feet away and asks, “What’s your emergency?”

The student reports there is a person in distress – or rather, a mannequin representing a person — on the floor of the Crossroads Middle School choir room. Student Austin Butterworth gets down on his knees and starts applying chest compressions, urged on by Quinn.

“Deep as you can!”  Quinn exclaims as Austin pushes on the mannequin’s chest to the beat of the Bee Gees song “Stayin’ Alive.” “Keep going! Thirty more seconds! Don’t get tired on me!” Warns another student, “He’s dying!”

It’s not actually a matter of life and death, but it could be. These seventh- and eighth-grade students are taking a training session in CPR, part of a year-long program to teach 570 Crossroads students how to respond to a medical emergency. Now in its second year, the program aims to train students in what to do until medical responders arrive. In the process, organizers hope it builds positive relationships between young people and the Plainfield Fire Department.

Students found out reviving a heart is hard work. Seventh-grader Stephanie Blok said the training boosted her confidence about handling a real heart attack, even as it tired her hands.

“If the actual thing would happen, I think I would have more adrenaline, so I could do it faster and harder,” Stephanie says after a two-minute drill on the mannequin. “The pressure would be a little bit hard, because it’s someone’s life in your hands.”

Crossroads initiated the program in the 2013-14 school year after being approached by Quinn.  Physical education teachers Cindy Stevens and Kevin Bustrum set up the two-day training sessions. More students will take the training beginning Jan. 2015.

Plainfield Fire Chief David Peterson said he instituted a CPR outreach to schools after serving in Norton Shores, where all high school students were required to have CPR training. He said he would like to extend it to all Northview schools as well as the Rockford and Comstock Park school districts, which encompass parts of Plainfield Township.

“The more people that know CPR, the more likely we are going to have survivable incidents,” Peterson said. “That’s our goal.”

According to the American Heart Association, effective CPR provided immediately after a heart attack can double or triple a victim’s chances of survival.

Quinn, who runs the program along with Lt. Don Harkes, says it gives students basic skills that could help firefighters and other medical personnel save lives. His first call as a fireman was to perform CPR, and he has saved two children’s lives.

“To recognize they have an emergency, and then to act on it, is really what we’re emphasizing in the schools,” says Quinn, an equipment operator forthe Plainfield Fire Department. He and Harkes have been certified by the American Heart Association to teach CPR to students and the general public.

Quinn, who hopes to bring the program to Highlands Middle School next year, says some ninth-graders who took the program at Crossroads last year have returned for more training to help them as baby sitters or lifeguards.

Harkes tells of a local woman whose husband collapsed over Thanksgiving weekend. She performed CPR on him until firefighters arrived. On the way to the hospital they brought back his pulse.

“So this stuff does work,” Harkes tells students. “You guys are a very important step in this process.”

With lists and laughter, she’s ready to lead