Godfrey-Lee Public Schools students were challenged to think outside the box — and inside, under, over and through it.

Turns out, with a little thinking a plain-old cardboard box can become a skee-ball game, a claw machine that grabs candy or an amazing piece of art, like second-grader Andy Alvarez’s huge robot. “Everybody says ‘Wow!’ ” said Andy about people’s reaction to the robot, which towered over his head. 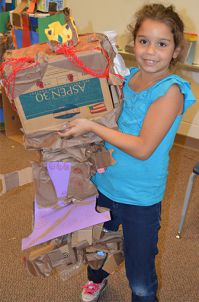 Kindergarten through second grade students participated in the Cardboard Challenge recently, building houses, castles, robots and other cool creations that took over their classrooms.

They upped the creativity factor even further by pairing with Lee Middle-High School students to make a full-scale cardboard arcade in the gymnasium.

The challenge culminated in a carnival at the Godfrey-Lee Early Childhood Center, where students and their families played the homemade games, with students showcasing their work.

Stasiak collaborated with Rosana Tocco, Lee Middle-High School teacher, who got her students involved in the game-making.

“Caine’s Arcade” is a 2012 video about a 9-year-old boy, Caine Monroy, who built his own cardboard arcade in his father’s auto parts store. The video, filmed by Nirvan Mullick, went viral. Children all over the world werealso inspired to create cardboard games and creations.

According to the website cainesarcade.com, two days after the film was posted Mullick decided to start a non-profit to find, foster and fund creativity and entrepreneurship in more kids like Caine. Five days later, the Goldhirsh Foundation awarded a $250,000 Challenge Grant to help start the Imagination Foundation, which launched an annual Global Cardboard Challenge that engages over 100,000 kids in creative play each year.

A Gallery Walk and Carnival Fun

Ninth-graders Carlos Savala and Joaquin Hernandez helped build a paper toss game with a first grade student. The object was scoring points by throwing balls of paper into holes, basketball-style.

“It’s fun to see kids smile and have fun with it,” Carlos said.

The older boys said the younger student was quiet and shy, but had a plan in his head.

“Once he got used to us he wouldn’t stop talking about it,” said Joaquin.

Parents and students toured classrooms, checking out all the projects and played the games to win candy and little toys.

While in her classroom, second-grader Irais Gonzalez-Ibarra stood inside her project, a house with a “security camera” on the side. “I wanted to make a big one so people will like it,” she said.