The Weight of the Test

After Years of Increasing Emphasis, Some are Saying ‘Enough is Enough’ 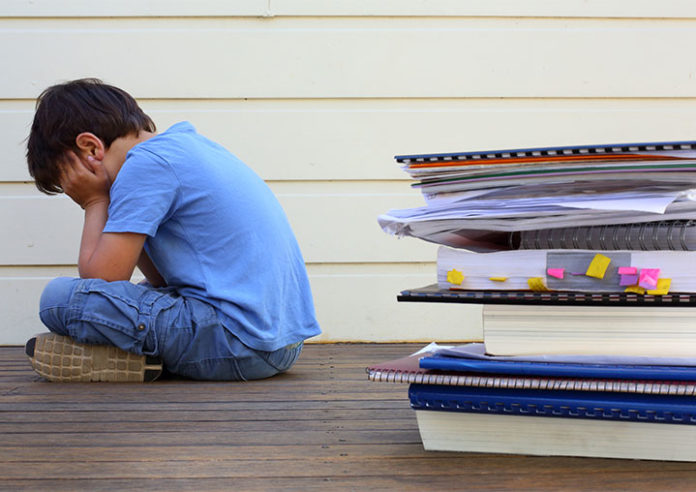 Taking the PSAT left Kent Innovation High School sophomore Anna DeBraber feeling stressed, frustrated and as if the years of work in class and the community didn’t matter.

She became so emotional about it that she created a 7-minute Facebook video to vent her concerns. Her score doesn’t reflect the real-world skills she’s developing at the non-traditional school where she gets to focus on group projects and presentations for a professional audience, she said.

“I’ve been thinking for a long time and seeing the effects testing has on the schools I’ve been to and schools around me,” she said, noting that the high school she previously attended was very ACT-focused.

The PSAT left her feeling that U.S. education has become very superficial, she said. “It gave a sort of sense that this test score, whatever you got, purely demonstrated everything you’ve done in your four or six years of upper education. It was the end all, be all. ‘Here is what you’re worth.'”

Anna’s perspective sheds light on what students face in U.S. classrooms, where they take an average of 112 state-mandated tests during their K-12 education, and high-stakes consequences are impacting them, their teachers and schools, said Bob Schaeffer, public eduction director for the The National Center for Fair and Open Testing (FairTest), based in Massachusetts.

Schaefer and other educators believe it’s time for change.

See Related Story: Parents Respond: Students are Being Over-tested – Public school parents’ top priorities for their children should be raising their level of hope and maintaining a high level of interest in what they’re taught, not standardized tests that have too much funding attached to them, according to a recent national survey…

Those words carry a weight much greater than they once did. Fifteen years ago, when Godfrey-Lee Public Schools Superintendent David Britten was principal at a fifth-and-sixth-grade school in Wayland, he and his staff used standardized test data to find patterns and to set goals.

The tests provided information, but weren’t tied to rewards or penalties. “They were not high-stakes tests by any means,” he said.

Now it’s a different story. Discussion on schools — whether affluent or poor, urban or suburban, traditional or non-traditional — quickly circles back to testing.

The U.S. upped the ante for schools, beginning with the No Child Left Behind era of the Bush administration and continuing through the Race to the Top initiatives started during Barack Obama’s first term. Scrambling to grab national incentives and avoid penalties, states have created their own ranking systems and penalties.

“I don’t have a problem with standards and accountability at all,” Britten said. “It’s this belief that putting all our nickels on the table for a once-a-year assessment like this causes us to narrow the curriculum and teach only at service level. We need to dig deeper.”

A high percentage of teachers’ evaluations are determined by testing. Schools are ranked according to scores. Students are drilled from an early age on what will be on a test, whether it’s the upcoming state assessment or the SAT,and they’ve learned to prioritize tests over other things.

Curriculum has been modified to align with the tests. Teachers are afraid to take risks and try different ways of teaching, Britten said.

“We’ve tried in the past to teach more on an interdisciplinary scale or project-based learning approach. Teachers feel that if they can’t cover the content they are going to be the ones on the carpet for how the kids perform, so they are afraid.”

Britten said there’s no doubt the testing sheds light on gaps in learning and the inequity present in low-income urban schools, but it’s had negative effects which have affected teachers, students and the quality of content being delivered. With most of the focus on math and reading, science and social studies have often been set on the back-burner.

“It’s created an environment where people feel they are being solely evaluated as an organization and individuals based on one test a year,” Britten said. “You see when you walk in classrooms the sense of urgency to get things done by the end of the bell, to cover it all and hope the students retain it. The pressure is on them to make sure the test is aligned with what the state mandates.”

That urgency is misplaced for reasons greater than getting everything covered. There is research that indicates that a student’s emotional intelligence is a better predictor of future success than standardized test scores, said Northview Public Schools Superintendent Scott Korpak.

“This isn’t to say that standardized tests don’t have a place in a student’s education. They do. But they are not the primary indicator. An analogy would be of a well-balanced meal. Every part of the meal is necessary for proper nutrition. Just like our students need to be safe, physically and emotionally healthy, engaged, supported and challenged,” Korpak said.

There’s another thing to consider as well, a fact that doesn’t always make it into discussions. “I think a lot of our legislators have been sold a bill of goods by the big testing conglomerates like Pearson and others who have made billions off this test market since 2002,” Britten said.

Curriculum Dictated by The Test

Cedar Springs High School teacher Larry Reyburn is concerned that schools aren’t meeting the needs of all students. “There’s a portion of our student population we aren’t serving very well: the top and the bottom,” he said.

A long-time biology and agriscience teacher, Reyburn said students would be much better served if education was tailored to their individual needs, different from one student to the next

“We throw them together and give them all the same test,” he said. “We are so focused on getting kids ready to take the SAT and MME (which all juniors have to take) that it’s distracting…We seem to be giving up more and more of our autonomy at greater levels concerning what is being taught at Cedar Springs High School.”

Also the school’s Future Farmers of America advisor, Reyburn teaches students to grow food, tap trees and cultivate a community garden, things that are hands-on and real-world. He wants all of them to know about global issues regarding food and agriculture, and to be able to thrive in a professional environment, adapt to change, work with people, solve problems and figure things out.

“To a point, you have to teach to the standardized tests. It dictates a lot of what you spend time on. You spend a lot of time aligning things to the test,” he said.

Are Things Starting to Shift?

There are some indicators that education is beginning to lessen its intense focus on testing.

The Obama administration recently said schools need to minimize time spent on testing. New Michigan State Superintendent Brian Whiston has said he wants to cut down on the amount of time schools spend on taking standardized tests, and discussions have centered around dropping the M-STEP in lieu of a type of test educators feel is more valuable in helping students in the classroom. M-STEP results, like its predecessor MEAP, are not available until the next school year. The Michigan Department of Education recently modified its schedule for the M-STEP test to reduce the number of hours spent on the test taking and preparation. (see sidebar)

“We have to have multiple measures and we need to change to a growth model,” Whiston said at a fall retreat for Kent ISD superintendents. “Where did I as a teacher get a student at any grade level, and where did I take them? That’s where the conversation needs to be.”

He said teachers need to assess every day how students are learning.

“And certainly, when we spend $13-$14 billion on education, we have a right to see if we’re getting value for that investment. But that assessment has to make sense, and it has to be multiple measures, not just one test, one day.”

Korpak agreed that tests like Measure of Academic Progress (MAP), administered through the Northwest Evaluation Association (NWEA), provide better data for schools. “This test provides almost immediate feedback, and provides information to the student, their family and the teacher,” he said. “With this option, it makes me wonder why the state of Michigan has to develop their own test, the M-STEP.”

“I think we are putting way too much emphasis on testing,” he said, noting that standardized tests don’t take into account children with different needs. “The amount of hours we are taking the kids out of the classroom to test is a problem as well.”

Also, No Child Left Behind was replaced in December when Obama signed The Every Student Succeeds Act, which loosens the federal grip on education. Under the law, schools are still required to assess students annually, but there is added focus on college- and career-ready standards. It puts assessment of student performance and school rankings into the hands of the state and is based on multiple measures. Interventions for schools in the bottom five percent will also be identified and developed by the state with dedicated funding for the lowest-performing schools.

In terms of evaluating teachers, a Michigan bill passed in November, Senate Bill 103, creates new standards to evaluate teachers and administrators. Districts will have to weigh many factors, including student-growth data based on state and local tests and in-classroom observation of teachers. Though 40 percent of the evaluations will be based on state and local tests, that is down from 50 percent.

Anna, the frustrated Kent Innovation High student, would like to see an education system where students can excel at what they love and become more than just good test-takers. She wants all students to be able to develop skills not recognizable through bubble tests.

“Overall, I think it should be recognized that students aren’t all the same based on the year they were born. They have individual skills that aren’t necessarily measured by the test,” she said. “If people don’t feel so boxed in, if they feel more passionate about their education, they will take the opportunity to learn more, We don’t have an environment right now where that’s the case.”

She said she likes Kent Innovation High, where she feels she is learning skills she will use in her career. “There’s a real-world audience and a way to connect with the world. It makes the work more meaningful.”

Anna thinks the state needs to recognize the individuality of every child and create diversity in learning. “One size doesn’t fit all.”