One morning at his daughter’s school, Tom Walla watched contentedly as 3-year-old Libby pasted leaves onto a wreath with help from a teacher, then joined other children in a playful learning circle.

“If you’re happy and you know it clap your hands!” sang teacher Carol Kersjes, as Libby and other students followed along the best they could.

It made Walla happy to see his child interacting with other kids and learning new things. Those were no small accomplishments for Libby. She has eyesight problems, cannot walk on her own and speaks just a few words. But with the help of special-education services since birth, she’s come a long way. Her father is grateful.

“It’s what every parent wants, to see their kid grow,” Walla said later. “She’s growing. You can see it. You can see the potential.”

Helping children like Libby reach their potential is the mission of Grand Rapids Public Schools’ Ken-O-Sha Early Childhood Center, which serves children throughout Kent County from birth through age 5. Located at two different schools, the program works with children at home until they turn 3, then in classrooms where teachers team with therapists, technology and toys to meet students’ many challenges.

Call Ken-O-Sha the ground floor of special education in the Kent ISD, where some 14,500 public, charter and private-school students receive services up to age 26.

In striving to get children as close to regular classrooms as possible, identifying their needs early is crucial, said Denise McConnell-Brown, principal of the Ken-O-Sha Center @ Campus Early Childhood program.

“Research shows early intervention works,” McConnell-Brown said. “So the younger we get them, the better the outlook.”

The Younger the Better

In the state of Michigan, schools intervene early indeed. It is one of only five states that serves children beginning at birth. For youngsters like Libby, that can make a huge difference in their educational success.

She began receiving home visits from Ken-O-Sha staffers when she was little more than a year old, after being diagnosed by school evaluators as having health and learning impairments. This fall she began taking half-day classes at Ken-O-Sha five days a week.

Located on the main campus of Grand Rapids Public Schools, Ken-O-Sha @ Campus serves children from 10 of the Kent ISD’s 20 public school districts. A second Early Childhood Center, located at Ken-O-Sha Elementary School at 1353 VanAuken St. SE, serves the other 10. Between them, the centers evaluated 630 children age 0-3 this year, and each enrolls more than 250 in their home- and school-based programs.

Founded nearly 50 years ago, Ken-O-Sha Early Childhood is the place to go in Kent County for children with challenges such as delayed speech, autism, Down syndrome, cerebral palsy and severe physical impairments. Class sizes are limited to about half a dozen for more severely impaired students, up to a dozen for others.

Their considerable needs are met by a small army of specialists: teachers, physical and occupational therapists, speech and language pathologists, social workers and psychologists, paraprofessionals and nurses. They use everything from iPads to blocks, paper and glue to help students learn language, movement skills and social interaction.

On one morning, Kersjes led Libby and five other 3- and 4-year-olds in pointing to pictures to show what snack they wanted. An aide helped her out and a nurse was on hand.

“Tell Carol, ‘I want Cocoa Puffs!’“ she urged one boy, helping him point to those words on picture cards.

In another room, teacher Joanne Hewartson and speech pathologist Kathy Kowroski sang songs and flapped a colorful tarp over Jackson Little and Zoey Beckett, children who have severe multiple impairments.

“Val-da-ree, val-da-rah, I love to sing my sounds,” the teachers sang, laughing as they gently covered the children with the tarp. The sound, motion and color aim to stimulate the children’s senses and focus their attention, Hewartson said.

“They’re noticing what’s in their environment and interacting with the environment,” she added. “That’s what we want.”

Zoe, 5, is in her last year here. Next year she may go to Lincoln Developmental Center, one of several special-education programs to which Ken-O-Sha children graduate. Many others return to their home districts for general-education classrooms or special-education services.

“The goal is always to get them as close to regular education as possible,” said McConnell-Brown, the principal, adding that staff members treasure every step of progress. “We love that ‘aha’ moment when a student’s world expands just a little bit because of something that we have done.”

Libby is “absolutely blossoming” in the classroom this fall, and exceeding the goals teachers had set for her, said her father, Tom Walla.

That’s a long ways from where Libby started just over three years ago.

Although born a “happy little baby,” problems soon cropped up, Walla said. She was fitted for glasses at about six months because of strabismus, a condition in which the eyes don’t align. She would hop with her arms instead of walk, had weak muscle tone and once suffered a seizure. Walla and his wife, Beth, a Rockford Public Schools teacher, took her to a neurologist, and she began getting occupational and speech therapy at a private clinic.

The neurologist referred them to Early On, a Kent ISD program for children 0-3 with developmental delays or disabilities. Physical therapist Jane Heinzman visited the family with another evaluator, and concluded Libby qualified for Ken-O-Sha’s services (she has yet to receive a medical diagnosis and is undergoing genetic testing.).

Heinzman and other staff visited the home weekly to provide therapy and coach the parents on how to help their daughter gain strength and communicate with hand signs. Tom, a stay-at-home father, also took Libby to weekly sessions at school with other students and parents, giving him a needed community of support.

“You have that connection,” he said. “You care about each other’s kids.”

The school also helped Libby get leg braces and a walker, which was liberating for her, Walla said: “When we take her to the mall, she’s just so happy and free. She can go where she wants.”

The school community’s support also has helped Tom and Beth accept Libby’s impairments compared with other children who don’t have them, including their older son, Theo. Tom said he’s gone from looking for something or someone to blame to accepting what is.

“Things happen, and she’s right where she’s supposed to be,” he added. “She’s happy. She doesn’t realize she has a problem. I had to realize I shouldn’t be putting these expectations and creating these problems for her, because she’s completely happy.”

Libby’s contagious spirit — along with learning a couple new words and exceeding her educational goals — fills him with gratitude. When he visited her classroom one morning, she piped up, “Da-da!”

“Her enthusiasm and determination, it brings a lot of smiles to people,” he said. “We look at it as a beacon of hope.

“We just try to enjoy the moment and let her bring the joy to us.” 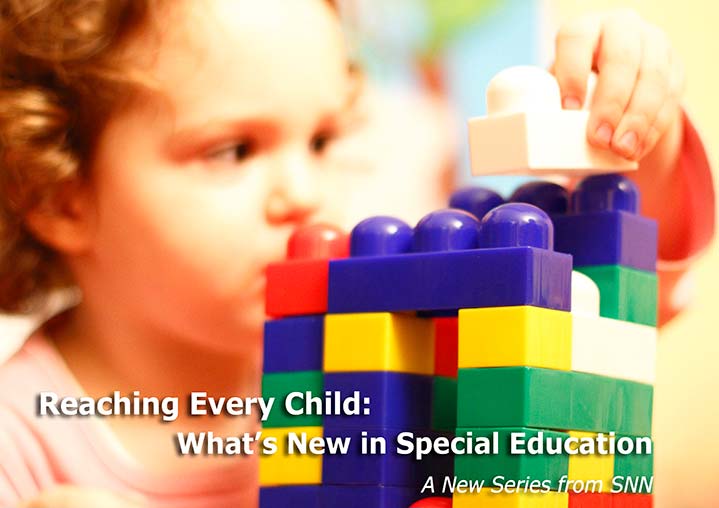