Gift is Legacy of Trevor and Kim 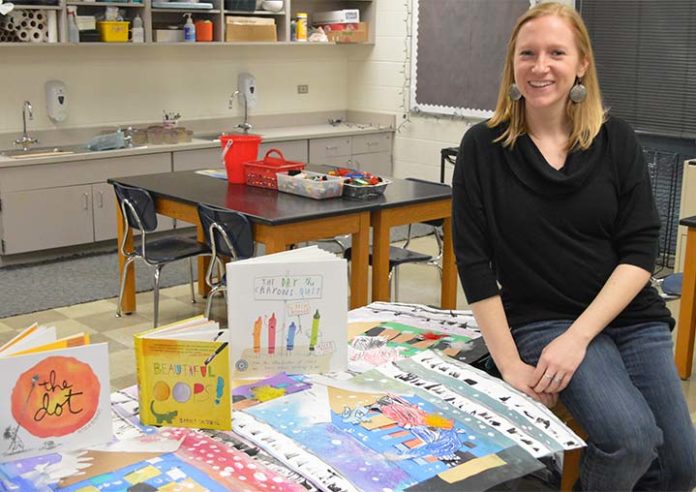 Rosie Haugen is a children’s book fanatic. She readily admits this – in fact, proudly proclaims it — as she shows off her personal collection in the art room at North Oakview Elementary School.

Haugen continually pulls out those books to inspire her students’ art work, using the themes and techniques of authors and illustrators to jump-start her pupils’ creative powers.

“I use the books as a launching point, an inspiration and getting kids excited for whatever we’re doing,” she said.

So she was thrilled to learn she received $500 from the Officer Trevor Slot Book Lovers Grant funded by the Northview Education Foundation. Named after the Northview High School graduate and Walker police officer who was killed in the line of duty in 2011, it was established by his wife, Kim Slot, a former Crossroads Middle School teacher, who died of cancer last September at age 43.

Haugen said she is “really blessed” to earn a grant honoring a couple so well-loved in Northview.

“They touched so many different people,” Haugen said. “If I could have that sort of impact on the students … They just spread so much love through the community.”

The grant will roughly double the size of her classroom library, mostly bought by her but some previously funded by the NEF. She purchased nearly 40 story books on Amazon. They arrived in mid-January, prompting Haugen to laminate their covers and buy new shelves.

“I cannot wait to get these books in their hands,” she said.

Now in her third year at North Oakview, Haugen teaches kindergarten through fourth grade. She makes ample use of children’s literature to support and inform students’ art work, drawing on the books’ beautiful or offbeat illustrations to get their minds and hands moving.

She also connects what students do in art class with what they’re studying in other classes.

For instance, she did a unit with third- and fourth-graders based on the book “The Day the Crayons Quit” by author Drew Daywalt and illustrator Oliver Jeffers, about a box of crayons that refused to color. Haugen’s students put on a concert in their music class based on the book, and transformed themselves into crayons in drawings that were displayed during the concert.

Her second-graders studied “Journey” by Aaron Becker, a wordless picture book about a girl who draws her way into a magical realm.

Using what she calls “visual thinking strategies,” she then asked them what kind of worlds they would create if they had a magic crayon or tool.

“At the end of that, they have these beautiful fantasy worlds they’ve created,” Haugen said. “That’s the launch pad for their story.”

Students sometimes flesh out their picture stories in their writing classes, she said. “I really try to connect what they’re learning in their classrooms to the art work we’re doing,” as well as provide a different learning environment from the right-or-wrong answers of academics. She calls it “a safe place to make mistakes,” which can become something beautiful — a quote from the book “Beautiful Oops” by Barney Saltzberg.

Teacher-librarian Carrie Davies, who helped nominate Haugen for the grant, said her enthusiasm for books reaches into all corners of the school.

“You can’t help but be excited about books when you’re around her,” Davies said. “She is impacting every student in our building.”

Haugen proudly shares her students’ art work on a website called Artsonia and in venues like the Plainfield branch of Kent District Library. And she’s eager to inspire her students anew with her new books, thanks to Trevor and Kim Slot’s legacy.

“To be able to share that passion for reading they both had – it’s oozing out of me,” she said.