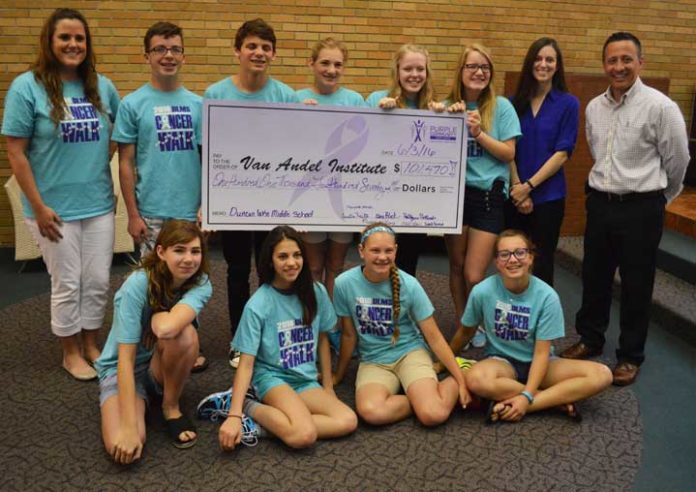 Each year, many personal stories are tied to Duncan Lake Middle School’s annual Cancer Walk, which has raised more than $100,000 for cancer research since 2008. But for this year’s crop of eighth graders, the effort served as a reminder of a funny friend who loved adventure and frogs.

Led by nine eighth-grade students on the Student Council Leadership Team, Duncan Lake students raised $26,347 in just three months, topping the $100,000 mark for total raised since the 2008-2009 school year. Leadership students recently presented the $101,470 check, symbolic of that total, to Van Andel Institute’s Purple Community representatives. It’s the largest sum ever raised by a middle school for the cause. The effort started in 2008, when then Duncan Lake student Hannah Jablonski, proposed starting a walk and students raised $515 the first year.

Tammy Morris, whose son, Jacob, died April 12, 2014 from a malignant brain tumor after a 16-month battle, was in the audience during the check presentation. Her husband, Tim Morris, serves on the Caledonia Public Schools Board of Education.

Jacob, who attended Kettle Lake Elementary School, was friends with many current eighth graders. He had a locker at Duncan Lake, but was too sick to go to school by the time sixth-grade started.

“Jacob is a small piece of this, but part of a bigger picture,” Tammy Morris said. Those touched by cancer at Duncan Lake include staff and family members. The year Jacob was diagnosed, a seventh and eighth-grader also battled cancer. Both are survivors, said Principal Ryan Graham.

“The impact for us is real, sincere and personal,” he said.

Leadership Team member Mackenzie Hamstra said nearly everyone at the school can name someone who’s received a dignosis. “Cancer is something that affects everyone. We can all relate to it.”

Grand Rapids-based Van Andel Institute is and independent biomedical research and science education organization. It’s fundraising arm, Purple Community, connects individuals, schools, teams, companies and corporations that want to join the fight against cancer and neurodegenerative diseases to resources needed for action. Duncan Lake’s donations have supported Van Andel’s MacKeigan Laboratory and helped fund an instrument called a Seahorse, which allows the study of how cancer cells are wired and the design of new therapies.

Raising more and more money each year involves a lot of creativity, said Kathy Wagner, Student Council co-adviser. Hallways become a marketplace of items for sale; fundraising challenges are set involving teachers willing to get a pie in the face or for Graham to dress like a princess. There are jousting competitions, wet sponge fights, penny wars. One student drew and sold caricatures of his peers.

Students step up, Graham said “We’ve made a specific goal of letting the kids lead it,” he said, noting that the goal is always set high. “They nail it.”

Eighth-grader Austin Kieth, a member of the Leadership Team, was good friends with Jacob. Beginning in third grade, they played Star Wars and superheroes on the playground. “It was always really fun,” Austin said. “We would pretend and act, and we could do whatever we wanted because it was imagination.”

Students remembered Jacob as bringing laughter to everyone he met, even when he was sick. During a spaghetti dinner in his honor, he pelted his friends with Jolly Ranchers. Students wore frog buttons and frog bracelets in his honor.

Jacob’s love for a good time was missed. “When he wasn’t there anymore it made a big difference,” said eighth-grader Alana Black, also a Leadership Team member.