While describing it that way may sound simplistic, it wasn’t. The problem was how to help students struggling in school. The method used to solve the problem was being taught for the first time, in what Kent ISD hopes to make available to all schools in the district.

Thornapple Kellogg High School students were the pilot program for a two-week Design Thinking unit created by Universal Mind, a high-tech consulting firm. It was a boiled-down version of what the Grand Rapids company does for its own customers.

“This project was great because it taught them how you go about solving a real-life problem,” VonderHoff said.

“We have a desire to help people solve problems differently,” said Matt Kortering of Universal Mind. “Education and training is part of what we do.”

Forming teams was the first step of the class, and it was done using a persona test. Students were given cards with one of these words on it: collaborate, create, control and compete. Then they were let loose to talk with one another and find the card that best described them. Six teams of four members were composed of one member of each personality type.

“People can be categorized into different personality groups, and they are all valuable,” said student Ryan Numberick.

The next step was research, which included interviewing people and developing ideas for solving the problem.

What did they learn? Lots. Such as: Computer science isn’t all about coding, how to work with others, and how to take an idea and make it into something real.

Companies hire Universal Mind to help them solve problems, and it’s frequently done by building websites or apps. Not all the solutions are done with a computer. “Our approach is a a little more thoughtful than just jumping right into solutions,” Kortering said.

While “solving a problem” sounds like what’s done hundreds of times a day at schools, this was a different but more valuable way than how it’s usually done, and VonderHoff learned along with her students.

“This is all new to me,” she said. “It’s so important to get our kids out there and see what the realworld is like.”

The teams interviewed struggling students and their parents, students who didn’t struggle, teachers and tutors. They presented their research and solutions at a class in December attended by representatives of Universal Mind.

Some of their findings included:

“I was surprised at how many people really struggle in my school and how much I could impact people,” said student Baili Bowers.

The solutions included creating apps and websites for students; teachers and parents that keep track of tests and when homework is due; creating “You Can Get Help” business cards with information about how to find a tutor; giving students a way to have instant contact with their teachers; sending them pictures of their homework; and incentives like Starbucks gift cards. 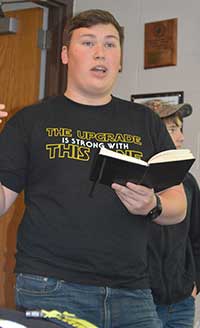 One group decided technology wasn’t the main way to solve the problem. It suggested offering after-school study classes and finding ways to fix the problem before it starts by having middle school students focus on study skills.

Although Universal Mind deals primarily with the digital solutions, Kortering praised their solution.

“I’m really glad one group said they didn’t have to use technology,” he said after watching the presentations. “They went down the path of technology and decided to scrap it and go in a different direction. They kept asking the question, ‘Is this best for the person we’re solving the problem for?’ ”

That type of empathy is a big part of why Universal Mind helped Kent ISD develop the course. “The whole goal for us is to understand what empathy is,” Kortering said of the firm, which is big on philanthropy. “It’s not just for yourself, but for others, too.”

The students were successful in their goal. “I learned that when you are creating an app or any product you have to have empathy,” Baili Bowers said. “You need to think about that person or group through every part of the creation.”

Lindsey Tilley, Kent ISD career exploration coordinator for IT and design, said she was amazed with what students came up with.

“This is something they don’t get a lot of opportunity to do, but something all employers are hiring for,” Tilley said. “Training brains to look outside our lenses is awesome.”

The project got its start the previous school year when VonderHoff’s class took a trip to Universal MInd. Tilley worked with the company to organize the class. When the company started looking for a teacher interested in piloting a two-week lesson, VonderHoff said she “jumped at the chance.”

Many businesses are having trouble finding skilled workers for jobs, and the problem is expected to get worse in the future. In an effort to combat this, Tilley seeks out businesses to get involved in education and find ways to teach skills that will be needed. “It’s the same kind of work they could expect to do in industry jobs in the future,” she said of the pilot class.

Universal Mind will keep developing the course, Kortering said, and hopes to have a kit on how to teach it ready in the coming year.