With its biggest jump since last year –from 25 to 46 percent in third-grade math proficiency– West Godwin Elementary School was named a Reward School by the Michigan Department of Education. It is the first time the school has earned the designation.

West Godwin was recognized for being in the top 5 percent of schools making the greatest gains in achievement and outperforming predicted levels based on traditional barriers to student achievement, and for performing above other Michigan schools with similar demographics. The measure is defined by M-STEP scores. At West Godwin, nearly 90 percent of students qualify for free or reduced-lunch and about half of the 460 student are English language learners.

“We did increase in every area we were tested on M-STEP,” said Karen Baum, instructional specialist. Increases also included a jump from 42 to 57 percent in fourth-grade English language arts. Fourth-grade math increased from 29 to 38 percent proficient. The district’s other elementary school, North Godwin Elementary, has also received the Reward School designation for several years. 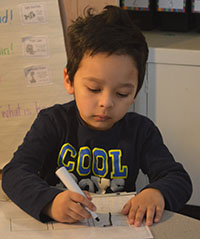 “We have a very widespread belief that all our kids can learn more, and there’s a very high level of accountability. Our teachers work their butts off,” he said.

The staff has also implemented character- and culture-building programs, which have led to a decrease in discipline problems.

West Godwin also was recently recognized for its success with ELL students by the Michigan Department of Education for academic efforts for Englishlearners over the past two years, as a candidate for the 2016 Title 1 Distinguished School award in the category of Serving Special Populations (English Learners).