‘Guide Them in The Learning’ 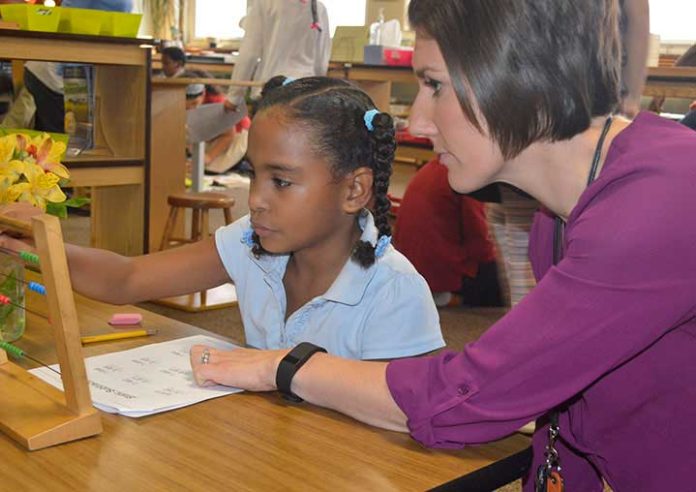 On a typical day at Grand Rapids Montessori School, several things are happening:

Seventh-grader Tyrell Henriques is creating a poster about the social pyramid of ancient Egypt, transferring information from his notebook to a poster board. “It’s exciting, interesting,” Tyrell says of his program in the former Fountain School on Heritage Hill.

A class of fourth- through sixth-graders sits in a circle, discussing how to solve the problem of people spreading rumors. “The solution should be don’t spread rumors, speak kind words and be nice,” one girl says, during the daily meeting all classes hold.

And in the Montessori High School next door, junior Gabbie Buggs is watering the plants. It’s her job in the resource room, where students can go to get help with their work.

“I like that we do stuff as a community – read to younger kids, help people in the neighborhood,” says Gabbie, who’s been in Montessori schools since seventh grade. “Everything is hands-on and the teachers work with you.”

Theirs are testimonials to the growing popularity of Montessori, one of the fastest-growing programs in Grand Rapids Public Schools. In the last five years, enrollment has nearly doubled, from 518 to 905 students.

Since its inception more than 40 years ago, GRPS Montessori has emerged as one of the nation’s longest-running public-school Montessori programs. It includes an early childhood center; the PK-6 program at Fountain and a PK-8 school at North Park; and a middle and high school located at Innovation Central. A new PK-6 school will be added next year, at the former Ridgemoor Early Childhood Center, to accommodate demand.

What’s the appeal? Take your pick, proponents say: teaching with concrete objects that build into abstract concepts; a multi-grade mix in classrooms; a philosophy of kindness and community service; and hallways filled with involved parents.

“We really like the principles of the Montessori program – the hands-on approach to everything they’re learning,” says parent Jesse Miles, who has a second-grader, Amelia, and a pre-kindergartner, Josette, at North Park Montessori.

North Park is crammed to the gills. Principal Robin Sorge calls it “spatially challenged,” as a band class rehearses nearby in the gym and a choir in the library. She has a hefty waiting list, and her students come from as far as Ada and Greenville.

Seventh- and eighth-graders are working upstairs, while on the first floor groups of grades 1-3 and 4-6 work together, an arrangement that keeps students with the same teachers for three years. That helps build community and enhances teachers’ attention to students’ individual learning styles, Sorge says.

Complementing the academic framework is Montessori’s philosophy of grace and courtesy, “educating the head, the heart and the hands.” Children are taught to talk through conflicts and to serve their community, helping out places such as God’s Kitchen and Clark Retirement Community. One student initiated a project at the Kent County Animal Shelter.

“The kids here learn their education takes place outside these walls as well,” Sorge says.

A Road Map of their Own

Back at the old Fountain School, Principal Kerri Reed presides over a program bustling with activity and bursting with students. Like Sorge at North Park, she has a long waiting list of families wanting to get in. She also oversees the middle and high schools at Innovation Central next door, which enroll close to 130 students.

A former classroom teacher, Reed sees the appeal of Montessori to parents and the value of its approach to students.

“It’s a lot about teaching the whole child,” Reed says, noting it takes teachers three years to be trained in Montessori methods. “The teachers are meeting each child where they’re at, then they’re challenging them.”

That philosophy works for Tracy Morgan, a pre-K and kindergarten teacher who’s taught 17 years in Montessori. She likes the choices it gives students to work in groups, pairs or individually, and whether to tackle math or journal writing first.

“I like that each kid has their own road map,” Morgan says. “I have 30 individual lessons that I give every day. I like that because every kid’s getting their individual needs met.”

In Kate Krueger’s social studies class, seventh-graders studied ancient Egypt while eighth-graders made miniature soldiers with which to enact the battles of the American Revolution. Students posted their summaries of textbook chapters in the hallway, so all of them could learn from others’ learning.

Stacia Gill’s ninth- and 10th-grade world literature students made Greek myths into books to read to early elementary pupils, while 11th- and 12th-graders compared Arthur Miller’s “The Crucible” to actual accounts of the Salem witch trials and related it to current divisions in society. Says Reed, “Her job is to guide them in the learning, not to give them the answers.”

The approach produces good academic results, Reed says, noting her school’s reading improvement scores are in the district’s top 10 on the Measures of Academic Progress tests. The school met 2015-16 state proficiency standards in English, math, social studies and science, although the bottom 30 percent of students did not.

The school also fosters student leadership with camps in the fall, and its positive culture is reflected in a 92 percent attendance rate and active parents who are welcomed into classrooms, Reed says.

Meanwhile, the Montessori Method produces one of the district’s highest achieving schools, Sorge says, as well as students who are “great problem-solvers (and) time managers.”

Parent Jesse Miles says daughter Josette’s reading and writing skills have taken off, while introverted Amelia has gained social skills through regular interaction with other students. He credits top-flight teachers and a “very calming, relaxed environment” for making his daughters want to come to school each day.

“They know they’re going to have a good time,” Miles says. “They come home and they’re very happy to show us what they’ve done.”

Wanted: a ‘moving and shaking team’

Vote expected next month in framework of school building plan