Can’t Find the Words? The Writing Center is Open 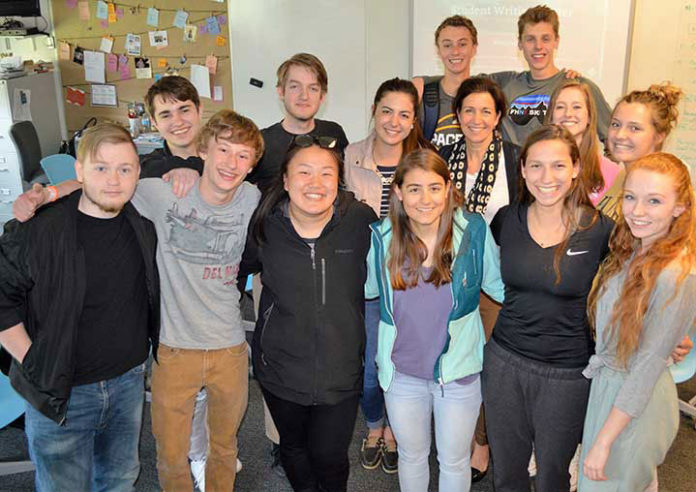 Earlier this school year, the Eastern High sophomore came to the fledgling Writing Center with a draft of a paper she had written on “The Great Gatsby.”

“I just thought that instead of meeting (the high expectations), I could exceed them,” Jane said.

She thinks the extra help paid off.

“I don’t think I would have gotten the grade I did without their help,” Jane said, gesturing toward sisters Kayleigh and Lindsey McKee. Jane was back again with a draft of a paper she wrote on the Supreme Court decision Miranda vs. Arizona.

“I just feel like I don’t have enough analysis in it,” Jane explained while the sisters took notes.

The Writing Center, which opened in late January, was created out of a conversation between senior Ben Brown and English teacher Lynn Cvengros.

“It initially came out of a ‘What if?’ question,” Ben said. “What if students had a place where they could get help with their writing?” And that included him. “I wanted to learn how to write from different perspectives.”

They tapped other students with an obvious passion and talent for the written word, and Cvengros’ new senior composition class took form.

Students used the school’s nod to design thinking, (more peer-to-peer teaching and student-led class design, in this case) to come up with a framework for the class. That included their own investigation of, and reports on, elements of writing they wanted to improve. They also created a webpage where others could sign up for appointments during lunch or after school.

Teachers share their scoring standards with Cvengros, and the class makes sure everyone knows what the expectations are for each assignment they will be helping students with. So far, 150 Eastern Hawks have perched on the blue plastic Writing Center chairs to get peer writing help.

“We really try to focus on not correcting papers,” said Calum Spoelma. “We’re somewhere between a peer editor and a teacher.”

And when they are not helping those students, members of the senior composition class work on improving their own writing by critiquing one another’s. In that way they learn who on their team is a whiz with thesis statements, or who kills it with parallel structure. Or who is a master at embedding quotations.

“It’s very much a workshop model,” said Cvengros. “They learn that to be able to explain it, you have to understand it.”

While better grades are an obvious benefit, it’s far from the only one.

Emma Robinson thinks she might want to go into teaching, so The Writing Center gave her some experience, she said.

Added Peter Cullen: “Showing someone else how to write better has been a really good way to improve my own writing.”

And from Kayleigh: “We’re kind of building a community, getting to know the underclassmen like this.”

That’s music to Cvengros’ ears and an important element of design thinking.

“My favorite part is you have freshmen interacting with seniors in this way, then they start recognizing and saying hello to each other in the hallways,” she said.

What if STEM was your job?