A Lesson of Wonder in the Sky 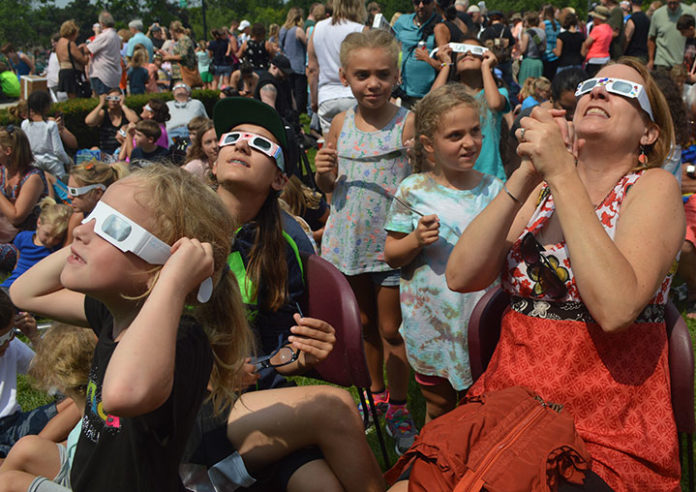 With eclipse glasses on, Kimberly Hudson and her children, Kiara Webley and Jonathan Hudson, waited in anticipation on the Grand Rapids Public Museum lawn as the moon crept across the sun.

“It’s exciting because maybe we will learn about it more in social studies and science,” said Kiara, a sixth-grader at Westwood Middle School, in Grand Rapids Public Schools, during Monday’s Eclipse Party.

Her mother, with kindergartner Jonathan on her lap, said viewing the eclipse was a rare event she wanted to share with her children. “They aren’t just reading about it in a book. It’s remarkable,” she marveled. “They will remember it for a long time.

Hundreds of families, many at the tail-end of summer break, donned viewing glasses and sprawled on the grass to watch the solar eclipse reach its peak of 82 percent totality, as was visible in Michigan. They were among the millions nationwide beholding the rare total eclipse as it traversed the country, providing marvelous memories and a wonderful opportunity for learning about the cosmos.

“Ooh, there’s a lot of it covered right now!” said Hannah Rethman, an eighth-grader at Crossroads Middle School in Northview. The museum hosted shows in the planetarium, a live stream of the total eclipse in the Meijer Theatre, and eclipse-related activities like making cardboard projectors.

But the moon and sun were the day’s headliners, and the perfect subjects to end summer, said City High School juniors Andrew DeBoer, Thea Bultman and Dean Moallemian.

“Usually you get a little depressed because school is starting,” Dean said, noting he will soon be back to hitting the books. “To have an eclipse like this is a really great summer event.”

It was actually the perfect segue back to the classroom, said Kent ISD science consultant Wendi Vogel. When it comes to real-world, or “out-of-this world” science, a solar eclipse covers it in totality. The state’s new Next Generation Science Standards encourage students to think deeply about the natural world.

“One of the things we are asking students to do in the new standards is to make observations about phenomena that they may or may not be able to explain in their own understanding,” Vogel said.

Teachers could go deeper with units including information on former eclipses and orbital and rotational data. “This is a really nice phenomenon,” Vogel said.

Kate Moore, GRPM vice president of marketing and communications, said the museum works to connect students with career pathways, and the Eclipse Party offered another opportunity for that.

“This is such a great learning experience,” Moore said. “We showcase science. We hope this will inspire kids to know what they what they want to do with their lives. It could be life-changing.”

“Having the party shows them that science is fun,” said Erin.

I’ll Follow the Sun: Solar Eclipse Path Across the U.S.