Students Learn From the Fruits of Their Labors 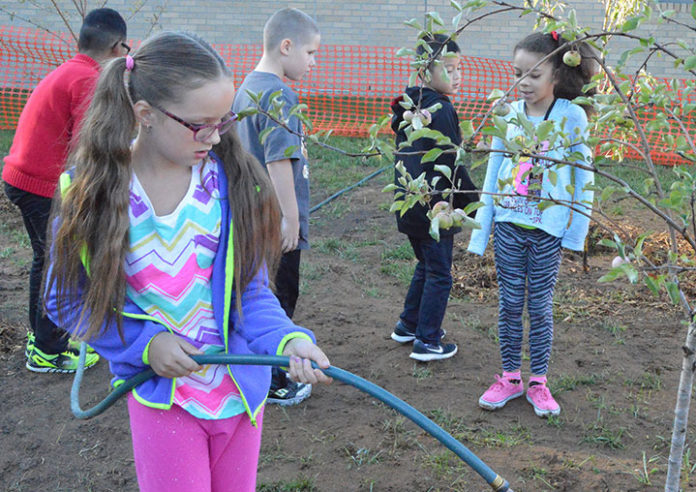 Five young apple trees grow outside West Elementary School. They are the beginnings of the Beverly Bryan Community Orchard, which could someday flourish with pear, plum and chestnut trees, blueberry and raspberry bushes, and feature benches and mulch for beautification.

The eventual goal is to feed hungry students and offer fresh produce to neighbors. It also provides the opportunity to teach agriculture to students, who will tend, water and harvest the orchard, said Kent School Services Network coordinator Erika VanDyke, who works to connect West students and families with local resources.

The orchard is being developed through a partnership with the Wyoming Tree Commission, called The Tree Amigos. It is named after the late wife of Tree Commissioner Greg Bryan, who donated $5,000 to the project.

Students recently watered the dwarf heirloom trees, checking out the little apples hanging from the branches. “I find it exciting that we are going to have fresh apples,” said third-grader Lyric McPhee.

Habitat for Humanity donated the trees from a downtown lot it is developing. A crew of volunteers recently planted them at West.