Stephanie Cionca stood in front of a class of fifth-graders and set up an exercise aimed at figuring out how much water they would need to add to one cup of plaster of Paris to get a perfectly pasty result. Then try to figure out if the reaction between the two ingredients is chemical or physical.

“I thought we were in art,” said student Rohan Bennett.

“That’s the point,” Cionca said. “We need to know math and science in art.”

Cionca went on to give examples of that, the last of which was that the artist who won the public vote in this year’s ArtPrize. Richard Schlatter, the grandfather of one of their classmates at Northern Trails, had to find a way to stop the chemical reaction that caused a color change in the pennies he used to make a gigantic portrait of President Abraham Lincoln. Otherwise, she said, the pennies would continue to change shades and the image would eventually be lost. 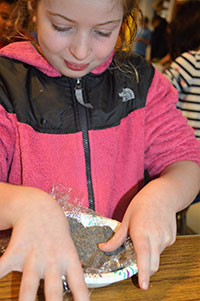 At this school for fifth and sixth graders, art is taught with a STEAM perspective. In other words, students learn how science, technology, engineering and math are related to art (STEAM).

Stephanie Cionca’s fifth-graders are beginning a unit about chemical and physical change, and why understanding these concepts are important for various kinds of artists. Using Next Generation Science Standards and Michigan Art Standards as inspiration, they are conducting investigations that will determine whether they think a chemical or physical change occurred with their materials based on their observations.

Those conclusions will lead over the four-week unit to the creation of two works of art: a functional paper-mache bowl painted with a self-designed symbol, and a nonfunctional piece inspired by American artist Frank Stella.

“I will not be telling them if they’re right or wrong while they are experimenting and making observations,” Cionca said. “Science standards encourage them to continuously think about and test, and refine their conclusions based on what they observe.”

This is the first time Cionca has led this particular lesson, but she’s already seeing some big-time science thinking alongside the artistry.

“I’ve already had one class come up with a genius way to prove if a change is chemical or physical,” she said.

As if on cue, fifth-grader Christian Granstrom held his plastic bag of plaster powder mixed with water and remarked, “It’s getting hot! This has got to be a chemical reaction.”

Brooke Gordon worked quietly beside Christian, using the pads of her fingers to smoosh a ball of ground newspaper, water and rice cellulose into the shape of the paper bowl it was in.

“It feels really, really smooth, but if you take a piece of it off, it looks a little fur-ish,” she said. “I love it. I love putting my hands on it.”

And what about doing science and math in art class?

“I think it should always be like that,” Brooke said.

What if STEM was your job?