‘My Class is More Than What I Teach Them’ 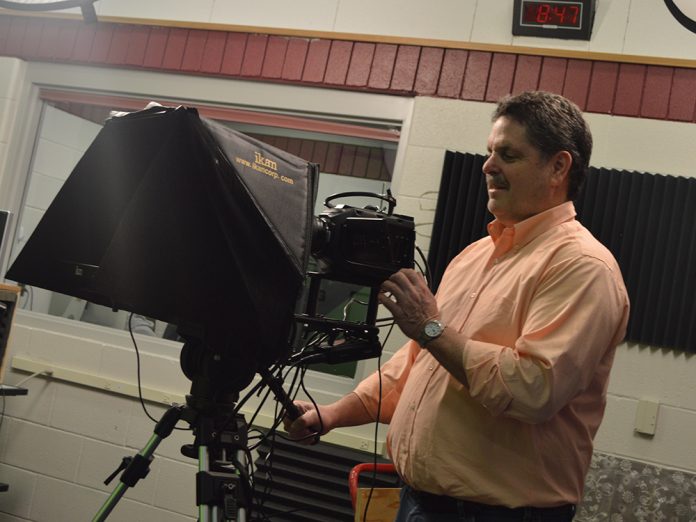 At 7:45 a.m. daily, teacher Terry Blevins begins the day with his 30 audiovisual broadcasting students tooling about a warren of separate rooms stuffed with computer screens, Canon cameras, teleprompters, professional video cameras on pedestals and video monitors. In less than an hour, they’re on the air — live — with their school news broadcast, beginning with their GHS announcements.

In the studio, every student has a job to do. The positions rotate every three days to ensure the class understands live production. On this day, with senior Jake Corfixsen and junior Megan Harrington anchoring the broadcast, they’re working through technical problems, pronunciation and Megan’s search for a hairbrush, while the boys in the glass-walled production room tweak graphics, audio levels, b-roll video and transitions.

“I love doing the broadcast live because I want them to feel the pressure,” said Blevins, the hottest ticket in town with hundreds of kids clamoring to take his class. “I tell them all the time that they’re making memories.

Rockstar Teachers Series: There’s just something about certain teachers that draws students to them in droves and keeps them checking in years, even decades later. Here, we highlight some of these rockstars of the classroom.

“They might not realize how important that is, but it’s pretty rare to walk out of here with this kind of knowledge, and video of just about everything that you did or cared about in high school.”

Back in the AV production laboratory, Blevins works the room like a boss: funny, smart, sensitive and beguilingly wry as the other students sift through their videos, write, edit and download music, while agonizing over every second because 30 seconds can be an eternity in video. Throughout the year, Blevins’ students are required to create 20 projects ranging from documentaries to sports highlights. It all finds its way to the school’s website, YouTube and Facebook.

In his audiovisual classes, Blevins underscores that each student is seen, heard and belongs.

“We have this whole thing about our brand. There’s a real sense of ownership, about finding your place here. Sometimes they don’t realize how much they have in common until they’re here.”

“This is so different than sitting in class and doing schoolwork,” said senior Jack Gumieny. “We have the freedom to do stuff, to get a camera and to start making something. We have the best teacher, a really good group of people to collaborate with and great equipment to work with. This is just beyond a normal class.”

For Blevins, AV is a gateway to engage, to be kind, to check in, to develop curiosity about everything.

Senior Sarah Kutchinski shared her 4.5-minute film titled “Violation” about the Time’s Up movement, which she plans to submit to Girls Impact the World Film Festival. It carries a potential prize of a $5,000 scholarship.

“He’s really the coolest teacher here because you’re allowed, encouraged really, to be creative and independent, and we’re trusted to do things on our own,” Sarah summed up Blevins’ class.

In 1985, with a fresh bachelor’s degree in mechanical engineering and industrial technology and secondary education from Western Michigan University, Blevins and his wife, Lynn, set off for McAllen, Texas. There he taught industrial technology for five years before returning to West Michigan, where Blevins joined Godwin Heights Public Schools.

‘We didn’t become who we are as a people by our ability to take a standardized test.’ — audiovisual teacher Terry Blevins

Two years later, he started an industrial technology program at Allendale High School, then joined Grandville High School a couple of years after that.

It wasn’t long before Blevins wanted to start a class in television, film and audio production. He got permission in 1997, starting with 22 students.

Fast-forward to 20 years later, and he’s teaching 135 students in five classes — and turning away about 80 per school year.

For his second hour, Blevins introduced Francis Ford Coppola’s “The Godfather,” the 1972 film based on Mario Puzo’s novel. He told students, “Look, this movie shows you in every way how important a great story is to a great movie. I expect you to notice the number of montages and tell me what kind of montages they’re using.”

Blevins likes to hook them on film critiquing as it’s his chance to teach the distinctive language of movies. He concentrates on two different approaches to filmmaking: mise-en-scene (basically everything that the camera sees) and montage (editing and sequencing images).

Blevins likes the doing, the knowing, the getting it done.

“We didn’t become who we are as a people by our ability to take a standardized test,” he said. “Show me what you know. Learn how to work together with other people. Push yourself. Get things done.”