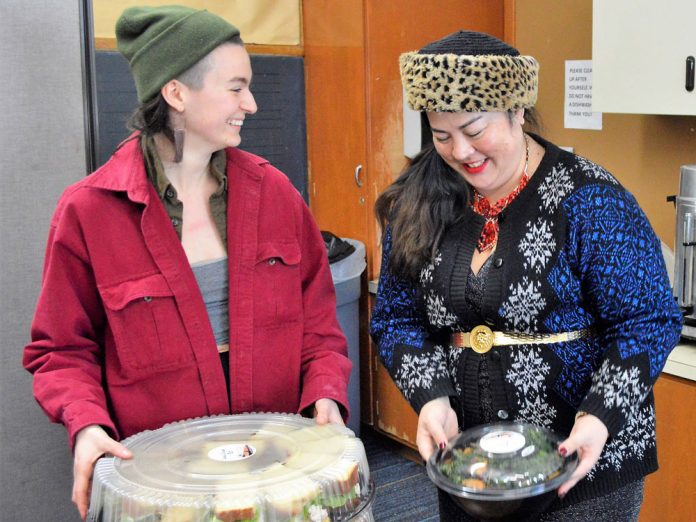 When Amanda Ebenhoeh walked into Congress Elementary School carrying an armful of food, Rachel Lee was ready to take it. She began setting up plates on which teachers would soon serve themselves sweet potato and quinoa sandwiches, kale salad and Valentine’s Day cookies, compliments of Marie Catrib’s restaurant, where Ebenhoeh is general manager.

The popular East Hills eatery donates teachers’ lunch once a month to the nearby school, thanks to Lee’s matchmaking. She also has arranged for other neighborhood restaurants to donate meals to the staff of about 30, drawing on her connections as former director of East Hills Council of Neighbors. It’s one of the many ways she supports her two children’s school, knitting it ever closer to its surrounding business community.

“I love the city, and I love doing what I can to contribute to make it a safer, better, happier and more equitable city,” says Lee, a longtime Grand Rapids resident. “That all starts with your neighborhood school.”

She began volunteering at Congress last year after seeing what a great school it was for her children, first-grader Lyon and third-grader Logan. “I can’t imagine my kids being anywhere else,” says the East Grand Rapids High School graduate, praising the dedicated staff and beautiful brick building.

She encourages other neighborhood parents to check out the school, and helps in the classroom and on the playground, all while running her own restaurant, Citizen.

With a degree in public administration from Grand Valley State University, Lee is a strong believer in “community building.” That commitment and her neighborhood activism helped her forge relationships with nearby businesses such as Family Fare, which pitched in a gift card, and Van’s Pastry Shoppe, which recently supplied goodies for a mothers-and-teachers breakfast.

“Businesses that support and invest in the schools receive that back,” Lee says. “It’s not just a donation, it’s a partnership.”

Besides building business relationships, Lee is a “parent leader” who encourages other parents to get involved, Principal Erek Kooyman says. “She’s here to help,” he says. “Anything we need, we just have to ask.”

Lee is happy to oblige. “I can come in here tired, and leave with smiles,” she says.

A series highlighting the parents, grandparents and other family members who give their time in schools to help students and teachers do their best.