Reading on the bus makes the journey so much better 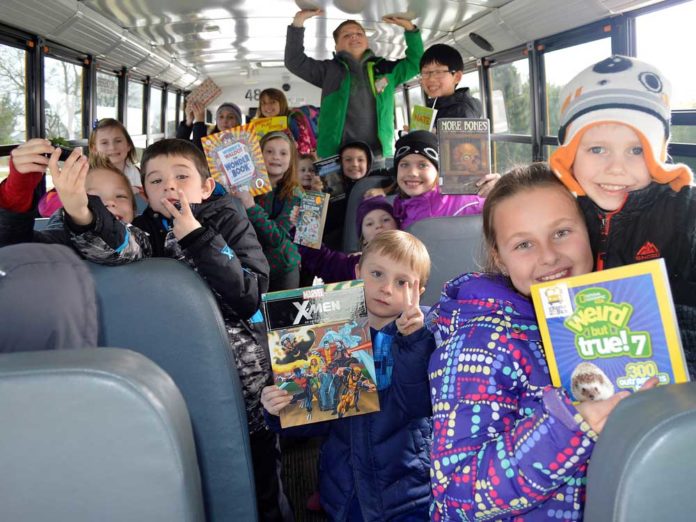 Drew Werner was the first one on the bus after school, and proudly handed driver Dawn Schuitman a note from his mom: “Drew read 5 books.”

That brought his total to 77 books read since March, putting him in the lead of his fellow bus riders from Crestwood Elementary School in a contest Schuitman is conducting. Drew’s big smile showed how much that pleased him.

Drew and his school mates are combining friendly competition with book-reading thanks to Books on the Bus. It’s a new program begun this semester to give Rockford students a fun and relaxing way to occupy themselves on their rides between school and home.

In partnership with Kent District Library, the program was funded by a $1,000 grant from the Rockford Education Foundation. District Transportation Director Jacquie Fase jumped at KDL’s invitation to start the pilot program with hundreds of books supplied by the library, and book bags to hold them, on 15 of Rockford’s 65 buses. She has ordered dashboard bags for the entire fleet and hopes to have them all stocked with books soon – donations gladly accepted.

Drawing on her experience as a former school bus driver – and the mother of five children who went through Rockford schools – Fase saw it as a way to help students behave and complement what they learn in school.

“These kids need to be engaged,” said Fase, in her 13th year as transportation director. “The school bus is an extension of the classroom – not the playground.”

A self-described “book person,” Fase always kept a supply of books in her bus while she was a driver. She found it kept students busy reading instead of bouncing around or picking on each other. It also reduced car-sickness for some of them, and helped many students “find success riding the bus.”

As she eloquently put it, “Books can take them many places beyond the Rockford city limits.”

The traveling little libraries have been popular with drivers, including Dawn Schuitman, one of 65 drivers who deliver about 7,000 students to and from school each day. She made up a contest for most books read by May 1, with the top six readers getting prizes. But everyone will get something, she said, because “They’re all winners.”

Students are free to take the books home and return them, or just read while they ride. It’s a great plus for their experience of a 30- to 40-minute bus ride, she said.

‘The school bus is an extension of the classroom – not the playground.’ – Transportation Director Jacquie Fase

“I think it’s important for the kids,” said Schuitman. “It gives them something to look forward to when they get on the bus. If we can put a book in a kid’s hand from the time they leave until the time they go home … they’re continually learning, all the time. Their brains are like little sponges right now.”

As her students boarded after school the other day, Schuitman updated their book counts and congratulated their progress. “Hey Brody, guess what? You’ve got 20 books! Eighteen, Zeke, good job!”

Second-grader Charlotte Jones was running a close second to Drew with 75 books. She and others pawed through the book bag to select new volumes, be they “Captain Underpants,” “Where’s Waldo?” or a Minecraft graphic novel.

“I like reading to him on the bus,” Addison said. “I think it’s a good experience for him. It gives him something to do.”

Those wishing to donate books may contact Jacquie Fase at JFase@rockfordschools.org