Hopes, Dreams and Here We Go

Graduates look ahead to life after K-12

Editor’s note: As the school year comes to an end at Northview Public Schools and several other districts, graduating seniors are moving on from K-12 schools to jobs, colleges and careers. Today, School News Network asks some Northview seniors about their hopes and anxieties about life after high school, and sits in on year-end portfolio presentations that capped their English 12 classes.

“Preparing students for life’s next step”

That’s long been the motto of Northview Public Schools, proclaimed prominently on the wall of the high school cafeteria. To help seniors prepare, English 12 classes teach students employability skills such as résumés, job interviews and public speaking. They are also required to put in at least 10 hours on a service-learning project with a mentor, connecting them to local businesses and agencies. The class, taught by Shelli Tabor and Rachel Truelove-Tedham, is part of a schoolwide emphasis on equipping students for the workplace.

Earlier this semester, School News Network talked with six of Shelli Tabor’s students about their school experiences and future goals. 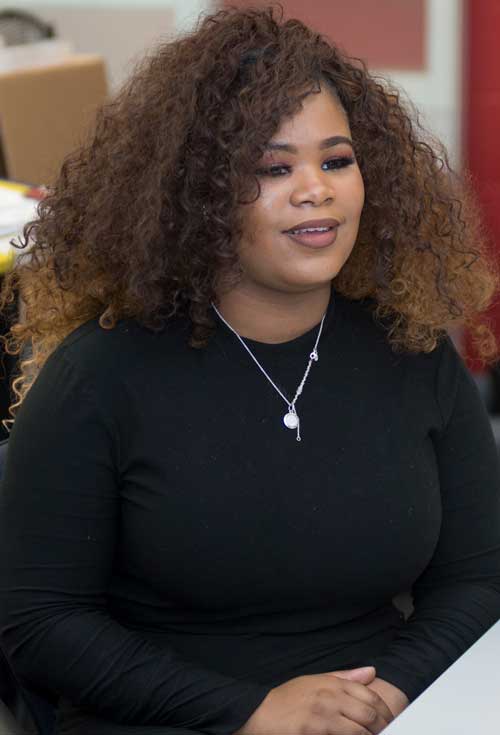 She’s All About the Arts

An avid art student with a focus on African-American culture, Avianna Kelly’s dream is to own a business such as an art gallery. She plans to attend Grand Rapids Community College initially, then hopes to transfer to the Art Institute of Chicago. Skills she learned in English 12, such as writing a résumé, building a portfolio and making community connections, should help her get there, she said.

Her service-learning project was with a ministry of her church youth group, Share the Warmth. Over the winter they passed out blankets, gloves, food and other gifts to people living in homeless shelters, their cars or on the street. She found it immensely gratifying.

“I like seeing the joy on people’s faces, how much it means to them when they receive a gift. It’s very heartwarming,” Avianna said. “Especially seeing kids who never received anything get gifts is a great experience.

“Anything I have, I try to give back as much as possible.”

Alicia Hall is a travel-team soccer standout who received a sports scholarship to Spring Arbor University, where she will study to be a teacher. This year she served as a kindergarten teacher’s aide at North Oakview Elementary, listening to students read, helping them learn to spell and mentoring them. She said working there helped her understand what she needs to know as a teacher, and how to help children enjoy school.

“They just kind of brighten my day,” Alicia said of her pupils, adding with a laugh, “You don’t have to deal with high-schoolers for an hour.”

The class also taught her how to write a good résumé, and she thinks the mock interviews helped her land a summer job at Dunham’s Sports. “It was more challenging than the actual interview,” she said.

He’s From Italy, but He’ll be Back

An exchange student from Rome, Edoardo Carloni learned an important skill by necessity this year: how to speak English. He learned it well enough to present a PowerPoint program on Italy to students at Crossroads Middle School.

“It was kind of cool,” Edoardo said. “You got to see the kids’ faces when you talk about your country. They still think there’s no one outside (the U.S.). When I talk about there’s a whole world you have to see yet, their eyes would open like, ‘Oh my gosh.’”

He plans to attend college in Italy and study either sports medicine or acting. In either case, he figures his English skills will be a plus – especially since he aims to return to the U.S.

“I already know that I’m coming back,” he said with a smile. “I’m enjoying too much this experience.”

Hands-on Works for Him

Austin Sova’s service project was something he loves to do anyway: work with his hands. He helped build the set of the school play, “To Kill a Mockingbird,” then talked about the production in a special performance for younger students.

“It’s showing them you don’t necessarily have to be book-smart,” Austin said. “You can learn ways to work with your hands and still do very good in life.”

He plans to attend Lake Superior State University in parks and recreation management where, with financial aid, he figures he will have costs paid off within five years of graduating. He has an eye on working as a conservation officer for the Michigan Department of Natural Resources. His reasoning: “I like being outdoors and I like being around people. It combines the two best things I enjoy.”

In the Woods, with Sixth-Graders

“They can be pretty testy at times,” Eli said of his young charges. Still, he said, “It’s kind of an amazing thing to see how much creativity some of these kids have.”

He wants to put his creativity to work by studying electrical engineering at Lake Superior State University, a school he chose partly because of its 100 percent job placement rate in engineering. He’s unsure what that job might be for him, though he’s interested in working for the military.

The school’s low cost relative to other state universities also was a major factor, so he’s “not way up there where I’m spending 20 years trying to pay off school.”

Looking ahead, he said, “I’m ready to leave high school and move on to the so-called real world.”

Speaking of the Real World …

Gavin Burk is quite clear about his life’s next step: studying international business at the University of Detroit Mercy, preparatory to a career in public relations and marketing. He wants to travel the world as part of his career, and sees Mercy’s 100 percent placement rate and Detroit’s two dozen Fortune 500 companies as great starting points.

His senior year has given him a great head start as well, he said. Classes in accounting and macro-economics, and résumé-writing and service learning in English 12 have “propelled me in becoming more of an adult vs. a high school student,” he said. Volunteering at Meals on Wheels also influenced how he views his responsibilities.

“We live in a world full of hate,” Gavin said. “You see the news every day. I feel like one person at a time, just by simple charity, we can help make a difference.”

While he welcomes life after high school, he also recognizes how different it will be.

“K-12, everything’s been planned for you,” he said. “Now everything’s on you. That’s going to be a challenge: focusing in and achieving those goals all on your own.”

To maintain a thriving economy, students need to be prepared for high-demand, well-paying jobs, yet there are currently more jobs than skilled workers to fill them. This series looks at how schools are preparing students for the future workforce. Read more from this series

Intro to printmaking a hit with fourth-graders