Freezing rain started just after school buses hit the road on a recent Tuesday morning. It was too late to cancel or delay school.

“It’s always hard when it comes so late,” said Don Hebeler, Wyoming Public Schools director of operations/support services, from his office in the Transportation Department. “We all just jump in and do what we have to do.”

Hebeler’s job as the head of district transportation, food service and custodial maintenance is all about dealing with sudden, unexpected situations. That icy morning he helped lay salt on parking lots, and — unrelated to the weather — worked with his crew to fix a dishwasher at West Elementary School.

“That’s what I love about it,” said Hebeler, a 23-year Wyoming employee who worked his first several years as a purchasing agent. “It’s different hourly sometimes. Some days are somewhat normal and some are quite hectic.”

Ice and broken appliances are just everyday obstacles. “You have to adapt and respond. … When you have good people to support you it makes things look a lot easier.” 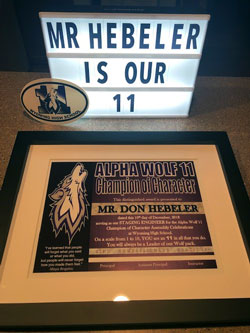 Hebeler recently was named an Alpha Wolf 11 at Wyoming High School for supporting others. The Alpha Wolf 11 program, started in 2016, honors “supreme pack leaders” who are kind, compassionate and gracious to one another. Hebeler was awarded along with six students during a grand ceremony he was instrumental in planning.

Staff members wanted to honor Hebeler for his work in transforming the gymnasium for the biannual celebrations of character, complete with banners, video screens, lighting, and decor.

“After each Alpha Wolf assembly, (Principal Nate Robrahn) and I discuss how it was received and what new ideas/improvements we can consider for our next celebration,” said U.S. history teacher John Doyle, who helped start the Alpha Wolf program. “Our conversation turned to how fortunate we are to have such tremendous support from our high school staff, central administration and our district maintenance personnel.”

While a big event showcases the work of Hebeler and his crew on a grand scale, day-to-day, behind-the-scenes work keeps the district of more than 4,000 students running smoothly.

“He’s always keeping an eye out for things to improve on,” said custodial/maintenance support staff member Don Hudson. “He’s always looking at everything and he takes a lot of pride in the district. There’s no question about it.”

Hudson said  Hebeler is diligent from dawn until after school hours, making sure food is served, buses get where they need to go and facilities and equipment — like dishwashers in elementary school kitchens — are running.

“It is amazing what Don does for our district,” said Robrahn, citing everything from trash cleanup to major spills. “I can text Don and it is fixed within an hour. He has so many little pieces to figure out, but always gets it done.”

Hebeler, however, said the Alpha World award is about something bigger than himself.

“I don’t think I do anything besides my job,” he said. “Because of the people who work with me, they are the only reason people would notice what we do. It’s more what they do, and I get the credit for it for some reason.”