Take a break, read a book, head over to the sensory nook

When Darla England proposed the idea of a sensory nook, the South Elementary Principal said that within 12 hours it was paid for and had enough volunteers to make it happen.

The idea took shape at Ridge Point Community Church in Holland. Part of the church’s “Day of Hope,” Ridge Point partnered with local and regional experts in mental health and education to create an event focused on trauma in schools.

England attended the event to learn skills to help students with the realities of trauma on a daily basis. As an added bonus, South Elementary was awarded $500 from Ridge Point to start the nook.

The community took it from there.

“We were overwhelmed and humbled by the support of the community and the nook that we created,” she said. “It’s everything we could have dreamed of and more.”

The school’s new sensory nook, a comfortable and convenient space where students can take a break when they need to calm down, is equipped with books on emotions, stress-relieving toys and soft lighting.

A trip there can often eliminate the need for students to be sent to the office, and increases the chances of being able to return faster to the classroom, England said.

Because of the community support, the nook environment was expanded to the entrance of the school.

“We had this stark, white wall at the entrance to our school and it really came down to ‘What do we want to say as a South community?” she said.

To come up with a design, students and families submitted pictures of what the school meant to them. The three winning drawings — by McCallie Retan, Kaitlyn Bisbee and Layla Fuentes — were incorporated into a mural at the building’s entrance.

England said she and her staff had a conversation at the beginning of the year about focusing on the growth and learning of all students, especially their social and emotional well-being.

“We wanted to make sure that we were being welcoming for not only students who are experiencing trauma or who have experienced trauma, but also for students who need more assistance with self-regulation and sensory regulation.”

The solution was a spot where students can decompress and relax. It also has become a reward system for students who want to or are showing positive behavior and want to talk to a friend while reading a book.

To further celebrate successes, the sensory nook also includes a showcase where students can display work they are proud of, from a spelling test to a science project.

First-grade teacher Betsy Heyboer has seen the nook in action for several of her students.

“The classroom environment can be a busy environment, and sometimes kids need a place to relax,” she said. “It can be a great retreat from everything.”

But, she pointed out, “The nook doesn’t have to be for severe behavior. We have students who are asking to go even when they’re feeling fine. That’s how we want the nook to be, a good place for students no matter the day.”

Second-grader Ja’bari Hill said he likes to visit the sensory nook when things get a little overwhelming in the classroom.

“The decorations and the toys help me to be calm when I come down there,” he said. “I like to read and just sit here sometimes when I need to. It’s really fun.”

Second-grader Jayce Chen likes how “everyone takes a turn in the nook so that we all get a chance to try it out. I like to hold the stuffed animal dogs while I’m reading books. It’s really comfy.”

Julie Rieger, a second-grade teacher at South, said teachers can tell when a student is having a struggle.

“Taking some time in the sensory nook can prevent things from escalating,” she said. “It’s a nice safe place to go when you don’t want other friends looking at you, or when you need some alone time.”

England said she hopes to expand the nook into a sensory room with more books and toys, and that nooks catch on in other district buildings. 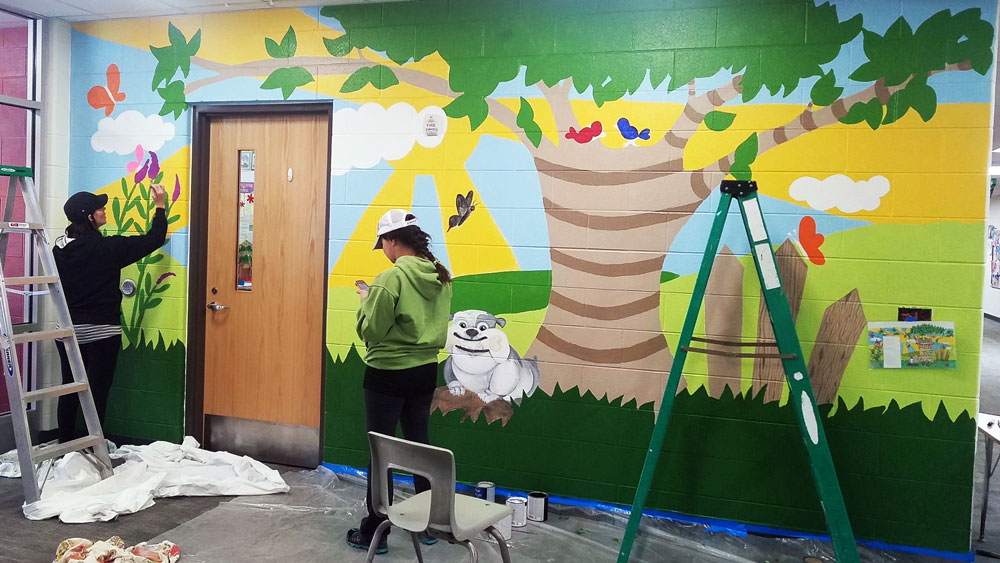 Hannah Lentz
A 2017 graduate of Grand Valley State University and a lifelong teacher’s kid, Hannah Lentz has worked as a journalist in and outside the Grand Rapids area for more than five years. After serving as editor-in-chief at the GVSU student newspaper, Hannah interned at the Leelanau Enterprise where she learned a lot about community journalism. In addition to her work for School News Network, Hannah has worked as a freelance blogger in the furniture industry, focusing on design trends, and as a social media manager for World Medical Relief in Detroit.

Hunting for clues to crimes in nature

Waving the green flag of learning