For some students, graduating takes five or six years — ‘and that’s OK’ 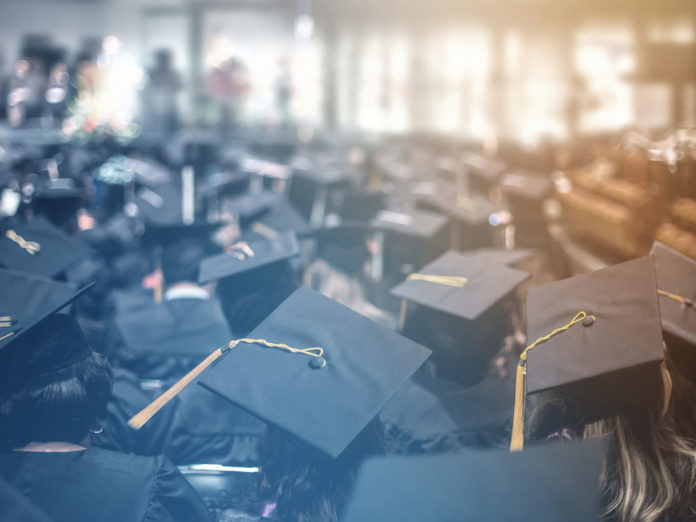 How can a student arrive in the U.S. speaking no English, with little formal education, and graduate from high school in just a few short years?

“Magic,” said Roufai Tagba, a refugee from Togo, who started attending East Kentwood High School in 2016 after a six-month journey from his native country.

Tagba left behind violence and famine in Africa, where he lost his parents, to start anew in the U.S. He spoke no English and was overwhelmed with uncertainty, to say the least. He didn’t believe he could learn in English. “I don’t know how to start,” he said about beginning high school at East Kentwood.

Staff and students in the English-language learner program embraced Tagba, as they do the many other immigrants and refugee students who attend East Kentwood. It wasn’t long before he was learning English – and passing math, social studies and science.

“EK is like magic,” Tagba said again, shaking his head and smiling. “I started loving to learn, I started being happy when I’m learning and I started to be able to say something and make sense in English.”

Tagba, 19, is finishing up credits required under the Michigan Merit Curriculum while attending school during the day and working second shift at Steelcase. He is graduating May 23 and hopes to become trained as a flight attendant, a profession in which he could use the six languages he speaks.

“I cannot wait to have my diploma,” he said. “It’s like I’m dreaming, to see myself graduate.”

He gives advice to others who face situations like his own: “If you want a great life, a special life, if you want to speak English fast, come to EK. They have everything to help you.”

For Some, It Takes Longer

East Kentwood administrators see many students like Tagba cross the stage at graduation, students who have overcome huge odds to earn a high school diploma. Sometimes it takes them a bit longer and they’re a couple years older than their peers.

Many English-language learner students, who make up 23 percent of EK’s enrollment, arrived with spotty or nonexistent formal educational. Often they need a fifth and even sixth year in high school to earn their diplomas. (For most situations, students cannot enroll in a traditional high school if they turned 20 years old before Sept. 1 of a school year.)

Districts including Kentwood, Grand Rapids and Wyoming face distinct challenges in their four-year grad rates, partly because of their large immigrant/ELL populations. But they are making progress under the radar.

“Our goal isn’t to hurry up and get them through.” said East Kentwood Principal Omar Bakri.

“Our goal is to make sure they have what’s necessary to make it to the next level. Sometimes it takes five or six years and that’s OK.”

Evan Hordyk, Kentwood Public Schools executive director for secondary education, said students working for five or six years rather than dropping out shows they understand the importance of a high school diploma.

“It also shows that they value what they have here at EK and what we are providing for them,” he said.

No One-Size-Fits All Deadline

The district has seen improvements in graduation rates overall, with the four-year rate for all East Kentwood students increasing from 83 percent in 2014 to 88 percent in 2018, according to MI School Data. But after factoring in fifth- and sixth-year graduates, that rate increases to 92.15 and 92.7 percent, respectively.

The most dramatic improvement is among ELL students, like Tagba. The four-year rate for ELL students at East Kentwood has risen from 69 to 74 percent over the past five years, with even greater increases in the five- and six-year graduation rates (see chart).

Bakri said many of the students are refugees, have faced war, extreme poverty, food insecurity and unstable living conditions. But, at EK, they feel comfortable quickly and are with students who have similar circumstances.

“One of the great benefits of having the most diverse high school in Michigan is they don’t stand out in a negative way,” Bakri said. “They look like everyone else; they blend in, which is a good thing.”

The trend of ELL students graduating at higher rates, especially as fifth-year students, is also evident at Grand Rapids and Wyoming Public Schools.

The district has done many things to boost those numbers, from more closely tracking students’ academic progress to emphasizing the importance of graduating in four years, said Ron Gorman, assistant superintendent of pre-K-12 instructional support. But when it comes to English-language learners, for many, graduating in four years isn’t realistic, he said.

‘Sometimes you need to stop the merry-go-round and get back on when you’re ready to go.’ —  Wyoming High School Principal Nate Robrahn

Many immigrant and refugee students come to the Newcomers program at Union High School to learn English and other basics, typically for a year. It usually then takes them another four years to earn the required credits for graduation, or they “age out” by turning 20 before they complete their program, Gorman said.

“The catch-22 is we truly want our students to learn how to speak English when they are in the Newcomers program, but we also want them to be four-year graduates, and many times that can’t just happen,” he said.

Union’s four-year grad rate in 2018 for its ELL students was 77.27, and 86.79 for five-year grads. Gorman said he’d like to see the state “start the clock ticking” on graduation rates after one year of English-language instruction. “I think that would be better than having us always having to say, ‘Here’s our four-year numbers, and here are our five-year numbers.’”

Even so, there are notable exceptions: Aunner Calderon, an immigrant from Guatemala, will graduate in four years this month — as class valedictorian.

Others Benefit from Extra Year, too

It’s not just ELL students who sometimes benefit from an extra year in high school. Hordyk said the Michigan Merit Curriculum is broad and demanding — much more so than for previous generations — so some students need extra time to pass all the courses.

There are also students who have learning disabilities, medical issues, or mental and emotional issues. Regardless, staff work to get them to the finish line. “We don’t want you to leave until you’re prepared,” Hordyk said.

‘Our goal is to make sure they have what’s necessary to make it to the next level. Sometimes it takes five or six years and that’s OK.’ — East Kentwood High School Principal Omar Bakri.

He credits initiatives to build empathy and better reach students, such as Capturing Kids’ Hearts and Restorative Justice. Like GRPS, they have also instituted better reporting. If a student leaves a high school, they are considered dropouts unless there’s record of where the student went. “We have to make sure we follow up with those kids,” he said.

“It happens more than it used to that kids come back and finish,” he said, noting eight to 10 do so each year. He’s seen students mature, complete requirements during a fifth year, and get their diplomas.  “Sometimes you need to stop the merry-go-round and get back on when you’re ready to go.”

Students with severe cognitive disabilities work hard to earn certificates of completion, rather than diplomas, but they are also counted as dropouts, said Gorman of GRPS. About 100 students a year in the countywide center-based programs have been so counted, he said.

Bakri said it’s all about providing each student with what they need.

“Everyone is different and that’s how you have to approach it. We have to meet the kids where they are at and from there, design what’s best for them,” Bakri said. “If you want a one-size-fits-all, do not come to East Kentwood High School.”

Charles Honey contributed to this report

A Compass to College