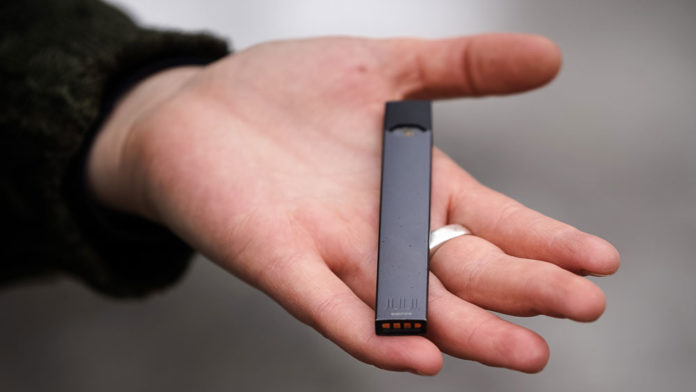 UPDATED: Spectrum Health has added an online resource that include facts and myths, conversations between teens and health experts and information about quit programs.

East Grand Rapids sophomore Bryn Bishop stood at the top of an aisle in the high school’s Performing Arts Center, thinking about what she had just heard during an assembly on the dangers of teen vaping.

It was all “pretty much what we’re hearing on TV,” she said. Nonetheless, “it’s pretty scary stuff.”

In school buildings throughout West Michigan and beyond, the use of e-cigarettes is officially an issue. A potentially deadly one.

EGR High School Principal Craig Weigel said vaping comes up just about every week, either through the discovery of a device or a student observed using one.

Unlike cigarette smoking or the e-cigarette devices used by many adults, the vapor produced by those teens are using today produce little to no visual or olfactory evidence.

“To call it an epidemic wouldn’t, I think, be an exaggeration at the high school level,” said EGR Middle School Principal Anthony Morey. “I wouldn’t say that it has reached that point at the middle school level, but we know (middle school) is where minds are shaped around these topics.”

The crisis is far-reaching. Up in Kent City: “We have seen more incidents of it than alcohol, marijuana and tobacco products combined,” said Scott Cook, Kent City Community Schools resource officer.

As state and national lawmakers grapple with how to regulate e-cigarettes and the liquids that deliver nicotine, K-12 districts this year are taking measures to inform young people about the known and suspected harmful effects of the devices.

Health class units have been added. Anti-vaping posters have gone up in some hallways. Student handbooks are being revised to include vaping, which most districts handle, discipline-wise, the same as cigarettes. Students can be suspended or, in Cedar Springs, for example, can choose to take a vaping education class, and athletes can sit out some of their season.

​At Rockford High School, a group of student athletes for the second year has formed a group called RAV — Rams Against Vaping. The students will soon begin collecting vaping devices and paraphernalia “with no questions asked” and destroy them, said Principal Dan Zang. RAV also helps out with the school’s anti-vaping messaging, including in bathrooms and lockers.

Cracking Down on Vaping

On Sept. 18, Michigan became the second state to ban flavored e-cigarette liquid, a day after New York did the same. Gov. Gretchen Whitmer was the first governor to order such a ban, on Sept. 4, when she announced she was outlawing the sale of flavored nicotine vaping products in the state — part of a national crackdown on vaping amid a recent spike in illnesses tied to the products. The decision came from increased use among teenagers and marketing that Whitmer said targeted youths.

The state’s chief medical executive has called youth vaping “a public health emergency.” As of Sept. 19, the National Centers for Disease Control and Prevention reported 530 probable cases of lung illness and eight deaths related to e-cigarette use.

School leaders will speak with parent networks through the year, and are considering a restorative approach to discipline, which would include students completing online tutorials to reduce their suspension time, Zang said.

‘(Vaping) is not a habit; it’s an addiction, and there are people who can help you.’ — Dr. Shelley Schmidt, pulmonologist and EGR parent

In East Grand Rapids, a community forum was held on Sept. 18 to share what is known about e-cigarettes and e-liquid — the material that is heated and produces vapor when exhaled. Earlier that day, presentations were made to district middle and high school students.

“My concern is, can we get information to our students in a meaningful enough way so they are informed as to what they‘re putting in their bodies,” Weigel said. “We’re trying to be as proactive as possible, to stay diligent in telling students this is not a healthy practice.”

While lawmakers, administrators and parents work on ways to warn children away from vaping — and teach them about the harmful effects on their bodies and developing brains — one group of East Grand Rapids students shared a bit about what it’s like to be a teenager at a time when e-cigarette use is becoming more common among their peers.

The number of students using e-cigarettes is “without a doubt extremely high,” said senior Nick Merritt. “In my grade, the prevalence is extraordinarily high.”

Why? “Take everything that cigarettes used to be for — stress relief, a way to look cool, for the buzz, to calm them down — that’s what e-cigarettes are now. It’s a whole new generation addicted to the exact same product.”

Senior Ashley McGraw said “teens are more interested in the buzz” than in vaping e-liquid without added nicotine. Nick agreed: “A lot of those zero-nicotine juices are for creating those large clouds of vapor. At one point that might have been a thing (among teens), but now that is highly looked down on.”

Ashley said her mother runs addiction and substance abuse conferences, “and I’m in agreement with her that it comes down to being a mental health issue. That dependence must absolutely suck.”

Nick has doubts about the recent ban on flavored e-liquid in Michigan.

“Personally, I don’t think we’ll see a decline in vaping because there are disposables with more fruity flavors. I just wonder at what speed the FDA will keep playing whack-a-mole with these tiny companies that spring up, target teens and sell tons to teens, then get knocked down and shoot out a subsidiary the next week.”

His proposed fixes: “Raise the age to buy them to 21, and much higher penalties for places that don’t card. You should at least be past the age where your brain is still developing.

“And I say we take away the glamor of nicotine addiction,” he added. “Make e-cigarettes taste and smell just as nasty as regular cigarettes. It needs to be a very methodical process.”

Teens have more at stake when it comes to brain development, added freshman Nick Collins.

“We talked about that in health class, that if you overuse nicotine it can actually affect your IQ and you’ll never get to your full potential.”

Dr. Shelley Schmidt, a Spectrum Health pulmonologist and district parent, along with patient Dave Stults, spoke to East Grand Rapids middle and high school students at assemblies on Sept. 18. The pair also presented that evening to parents and the wider community.

Of obvious concern are the health effects of inhaling nicotine in liquid form and the chemicals released from the devices themselves. But vaping also poses a unique risk to developing brains of children and teens, Schmidt warned.

“Repeated nicotine use at this time in your life carves pathways in your brain that set you up for lifelong addiction,” Schmidt told students. “I don’t think anyone should be paving anything into your brain that you don’t want paved into it. You should decide.”

Stultz has a lung illness brought on by breathing fumes from microwave popcorn with a chemical also found in some vape liquids. Other chemicals found in e-liquid and vaping devices include asbestos and formaldehyde.

“If there’s one truth we can give you today, it’s that we don’t know for sure what’s in it, and you don’t either,” he told students. “Why would you suck something into your lungs that you don’t know what it contains?”

Weigel, the high school principal, said he is encouraged that students today “are very well versed in when they are being played” by marketers and advertisers. He said students also are reporting what they see in school via OK2SAY and Silent Observer.

Marketing spin played a leading role in the presentations to students, showing similarities between cigarette ads of the 1960s and today’s e-cigarette advertisements.

Schmidt said she and Stultz testified at a recent hearing called by the Michigan House Committee on Oversight.

“What we heard from (pro-vaping advocates) was that this is a multi-billion dollar industry that’s worried about lost jobs and lost revenue, but not about you,” she told students.

“We have reintroduced a known toxic substance to your age group, and we need your help to find our way out of this again,” she added. “(Vaping) is not a habit; it’s an addiction, and there are people who can help you.”

From Sherlock Holmes to ‘The Spore’