Most districts allow phones, but with restrictions 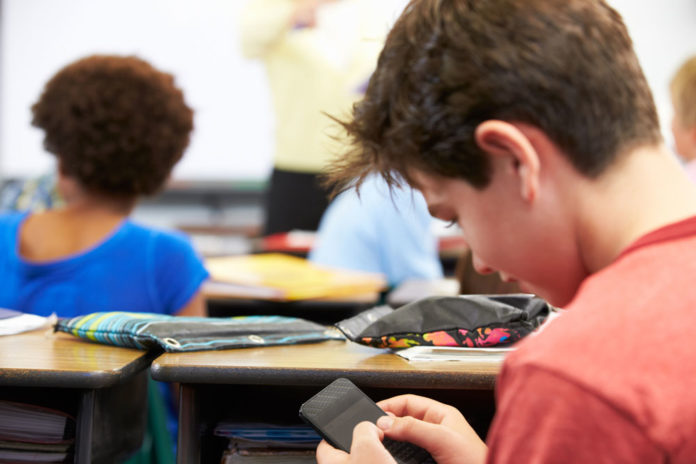 An informal School News Network survey of public school districts in Kent County besides Forest Hills showed cell-phone use is generally not permitted in elementary schools, and only allowed under strictly defined conditions in middle and high schools.

Of 13 districts that either responded to the survey, or whose student handbooks were publicly accessed, only Kelloggsville bans cell phones in its schools. However, other districts severely restrict their use unless approved by a teacher for instructional purposes.

’We are in charge of teaching, not checking kids at the door for cell phones.’

In Grand Rapids Public Schools, for instance, cell phones and other electronic devices are not permitted in elementary schools, and must be stored away in middle and high schools unless teachers approve them for instructional use. In high schools, other permitted times and possession are determined by school administrators.

In Grandville elementary schools, students must keep their cell phones in lockers and are given messages when necessary at lunch. Middle school students must turn them off and keep them out of sight during the school day. High school students may not use them anywhere during instructional times, including hallways, bathrooms and the library.

Related Story: How one district banned cell phones — and how everyone is adjusting – While Forest Hills has banned cell phone use in schools, other districts have varying policies, but essentially phones have become a distraction for many…

In Rockford, as in some other districts, high school students are allowed to use their phones before and after school, between classes and at lunch. During class they must store them in a designated area in the classroom, unless the teacher wants to use them for instructional purposes. But individual teachers manage their classrooms within those guidelines, modeling proper use of phones as a life skill, said Mike Ramm, assistant superintendent of instruction.

“We want to find this balance between protecting the instructional environment of the classroom while not being cell-phone police,” Ramm said. “We are in charge of teaching, not checking kids at the door for cell phones.”

Godwin Heights Middle School allows cell phones but students must tuck them away in a pocket or locker to not interrupt learning, said Principal Bradley Tarrance. But he said he would ultimately prefer students be able to have them in class face down until a teacher allows them for an assignment, saying it’s important to teach children “how to properly use resources such as phones.”

“When we worry too much about items like this, we take the focus away from educating our children and put the focus on making our kids follow rules,” Tarrance said.