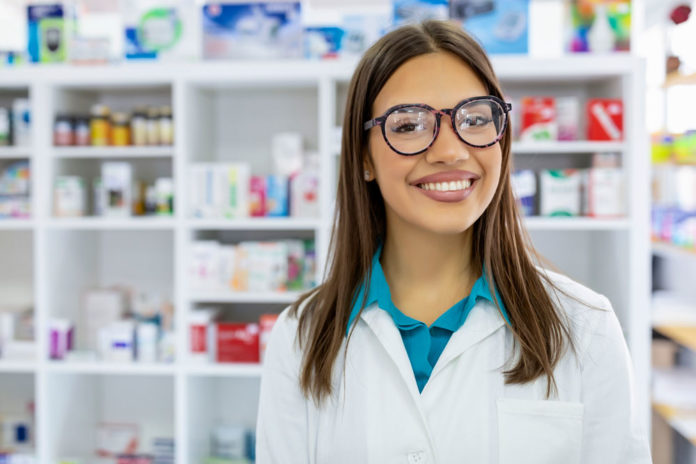 Grand Rapids Community College — When the coronavirus pandemic hit last March, Kate Greening found herself with time to reflect on her career.

The catering manager for corporate events was out of work as people stayed home and avoided gatherings. She began to brainstorm her options and, with a dusty 10-year-old bachelor’s degree in health information management, decided to begin building credentials in health care again.

She enrolled in the new pharmacy technician program at GRCC. Now, with that completed, she plans to get a job in a pharmacy as a licensed technician.

“I would hope to get into a hospital to advance into some kind of specialization,” said Greening, of Grand Rapids. “For the first two years, I just want to dive in and work under some people to give me the knowledge to help teach someone else this.”

She’s also looking for structured hours and less stress than she had in catering.

“I can still help people, but have a high focus on customer service as well,” she said.

GRCC recently finished its first 15-week pharmacy technician course, a hybrid of online learning and in-person labs. Twelve students were enrolled, working to earn their national certification from the Pharmacy Technician Certification Board.

Another session runs April 12 to July 30 and has room for up to 16 students.

GRCC offered a similar program several years ago, but stopped it due to the industry shifting to part-time jobs and little demand, said Julie Parks, executive director of workforce training. Now, due to increased interest and demand, the program has relaunched as a hybrid of online and lab work. While coursework is online, three lab sessions focus on simple compounding, customer service and other areas of the job.

Affirming that the profession comes with solid job prospects, pharmacy technician is on the West Michigan Works 2020 Hot Jobs List, with median hourly earnings listed at $15.24 per hour (certified technicians make more money per hour than non-certified) and a projected growth of 11.8 percent in demand from 2016-2026, and annual openings of 170. Nationally, the job outlook is projected at a 4% growth rate, according to the U.S. Bureau of Labor Statistics.

Instructor Clint Conley said an increasing number of pharmacies have opened in the area and an aging population comes with a greater need for pharmaceuticals. Also, pharmacy technicians are much less expensive to employ than pharmacists.

“The older people get the more meds they need and more people retiring out of the profession,” he said.

Pharmacy technicians essentially can complete all pharmacy work except a few duties that require a pharmacist, such as giving medical advice to  customers. They take and fill prescriptions, communicate with insurance companies, stock and order medications. Certified technicians make a couple more dollars per hour than non-certified.

“The primary things they need to have a passing knowledge of: the most commonly used drugs, classifications, side effects and uses of them,” Conley said.

Good math and customer service skills are also crucial. More and more often, techs are performing other services such as blood pressure and insulin checks.

“There are always new medications and new techniques and we are expanding in so many directions. Pharmacies are becoming mini health care centers,” Conley said.

Jontea’ Bolden, of Grand Rapids, is a certified nursing assistant who finished the course as a stepping stone toward her goal of getting a bachelor’s degree and becoming a physician’s assistant. She plans to work as a pharmacy tech while going to school.

The course gave her an in-depth look at the industry. She said Conley provided all the information she needed through effective communication platforms. “It wasn’t like we were just cramming stuff in our head and moving on,” she said.

Now she’s versed on everything from identifying pills to simple compounding and handling common scenarios with customers. Mostly, she likes the idea of having a role in people’s health.

“I just like helping people,” Bolden said. “This drug I am dispensing or handling right now might be the cure or help this person needs; I like that aspect of it.”

Athletes to take the pitch in 2023

Getting the band back together