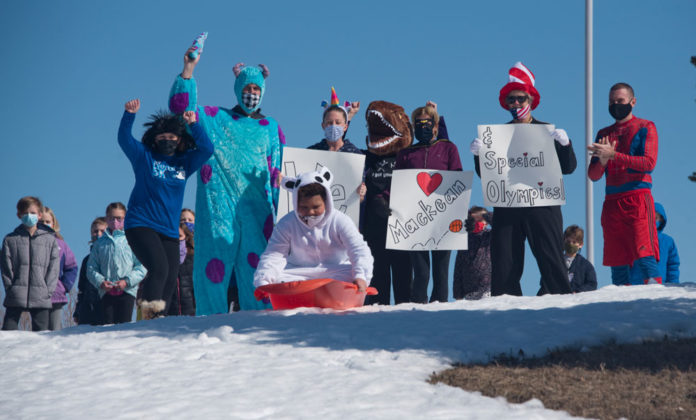 Caledonia – On a rare sunny, 45-degree day in February, six teachers stood in the snow dressed as superheroes and cartoon characters, and prepared to sled down a hill into a pool of ice water for a modified Polar Plunge.

Mackean’s dad, Andy Campbell, said Mackean spent three weeks fundraising for the Area 11 Special Olympics Michigan. Through the combined efforts of Mackean and his school, they reached their $1,000 goal.

“About a year ago, we tried to get Mackean involved in traditional sports. We wanted him to find a place where he could find success,” Campbell said.

Wearing a polar bear onesie, Mackean and best friend Grant Sager ran through the snow like they couldn’t feel the cold and took turns sledding down the hill. At Grant’s request, the pair took a few trips down the hill together.

When asked if he enjoyed being outside, Mackean yelled, “Yeah!” before turning to sled down the hill again.

Across the country, Polar Plunges usually involve a large number of people volunteering to raise funds for Special Olympics and jump into frigid bodies of water. Due to COVID-19 safety restrictions, Polar Plunges became virtual this year and gave participants the choice of where, when and how to get “bold and cold” to show their support.

For Emmons Lake’s modified plunge, Campbell hauled buckets and trash bins filled with water down a hill behind the school to fill a plastic kiddie pool at the base. He eventually enlisted the help of a snow sled to simplify the transportation process, while Mackean’s mom, Danyalle. got it all on video.

Special Olympics provides fitness and athletic opportunities for children and adults with intellectual disabilities. Mackean found his places playing basketball and this past summer, won two gold medals at the Summer Special Olympics.

“This school has really loved on our family and we are so grateful for all of their support,” Campbell said.

Principal Jenn Schultz enthusiastically led the charge for fundraising and setting up the Polar Plunge.

“This is only her first year at Emmons and Jenn has been amazing,” Danyalle Campbell said. “She really spearheaded this whole thing.”

Between filling up buckets and bringing them over to Andy, Schultz expressed her enthusiasm.

“I want to sled down the hill and make a big splash,” she said. “Go big or go home!”

When it was Schultz’s turn, the teachers took her at her word and dumped extra water into the sled before she sat down.

Schultz coordinated with third-grade teacher Megan Brown to record the event so students inside the building could watch live via Zoom. Meanwhile, Brown’s class came outside with her and cheered on the teachers as they went down the hill and into the pool.

Mackean and Grant stood near the pool to help dump extra buckets of cold water onto their teachers after they came down the hill.

“We couldn’t have asked for a better day for a plunge,” Blaser said just before surfing on the sled down the hill.

“Mackean has an amazing family, and a family at Emmons Lake as well. When one of our family members needs support, we jump in to help — literally, this time around. We are all very proud of him.”

While waiting for her turn, Mackean’s former first-grade teacher, Peg Mulherin, threw the first snowball, inciting a snowball fight amongst the teachers.

“Mackean always worked so hard and watching him take such an interest in the Special Olympics warmed my heart,” Mulherin said. “He found his special niche in his world.”

Mulherin explained how Mackean was just a toddler when his older sister was in her first-grade class.

“He used to come with his mom to volunteer at school and always had so much energy and a smile on his face,” she recalled. “It was just contagious and spread to anyone in the building (who) met him.”

Mackean and his family also hold a special place in the heart of his former kindergarten teacher, Mary Rossman, who dressed as Batman to take the plunge.

“I have known the Campbell family for several years,” Rossman said. “Together with his parents, I worked to get him the educational (and) emotional support necessary to function in my kindergarten classroom.”

Rossman described Mackean as “heartwarming” even in the midst of a cold Polar Plunge.

“I did not think twice about continuing my support for this special young man,” she said. “Watching him grow over the years has been a teacher’s dream.”

Alexis Stark
Alexis Stark is a reporter, covering Caledonia, Kenowa Hills, Godfrey-Lee, Grand Rapids and is a roving reporter for GRCC, Wyoming, Kentwood and Byron Center. She grew up in metro Detroit and her journalism journey brought her west to Grand Rapids via Michigan State University where she covered features and campus news for The State News. She also co-authored three 100-question guides to increase understanding and awareness of various human identities, through the MSU School of Journalism. Following graduation, she worked as a beat reporter for The Ann Arbor News - covering stories on education, community, prison arts and poetry.  Following a stint as a copywriter for a Grand Rapids area PR firm, she transitioned from communications to freelance writing and reporting for SNN.  Read Alexis' full bio

‘Whatever it takes’ to make a positive impact