It’s all about the mitten state 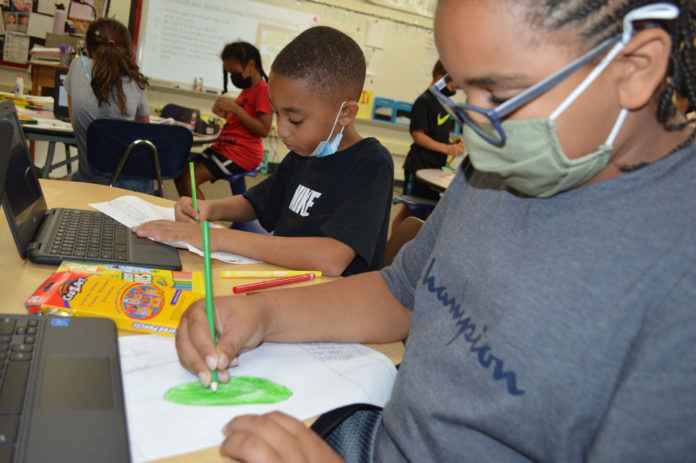 Northview— Any idea what Michigan’s official flower is? How about the state bird? Gem? Game animal?

For about the past five years, Wilcox’s third-graders, as well as those in Jayme Potgeter and Sarah Carpenter’s classrooms, kick off the school year by getting to know their home state.

In their first social studies unit, they visit up to four approved websites to research Michigan state symbols, then create a poster of their selected symbol that includes three facts.

For instance, Kaylee Scherbinski can tell you the state bird is the robin, and that robins eat worms and insects.

Ronnie Holmes and Jordan Reynolds know the state gem is the Isle Royale greenstone, found in the Upper Peninsula. Though both boys say they have yet to venture to the UP, “I’ve been to Ohio,” Ronnie volunteered. “And I’ve been to Detroit,” said Jordan.

But everyone in their class knows where Michigan’s UP is, and can make the shape of the Great Lakes state using both hands. “They learn that they always have our state map with them, right in their own hands,” Wilcox said.

Morgan Jarema
Morgan Jarema is a reporter and copy editor, covering Northview. She is a Grand Rapids native and a product of Grand Rapids Public Schools, including Brookside and West Leonard elementaries, City Middle/High School and Ottawa Hills. She found her tribe in journalism in 1997 and has never wanted to do anything but write. For 15 years she was a freelance journalist for The Grand Rapids Press, covering local schools and government, religion, business, home & garden and lifestyles. She and her husband, John, think even those without kiddos should be invested in their local schools and made to feel a part of them. Read Morgan's full bio