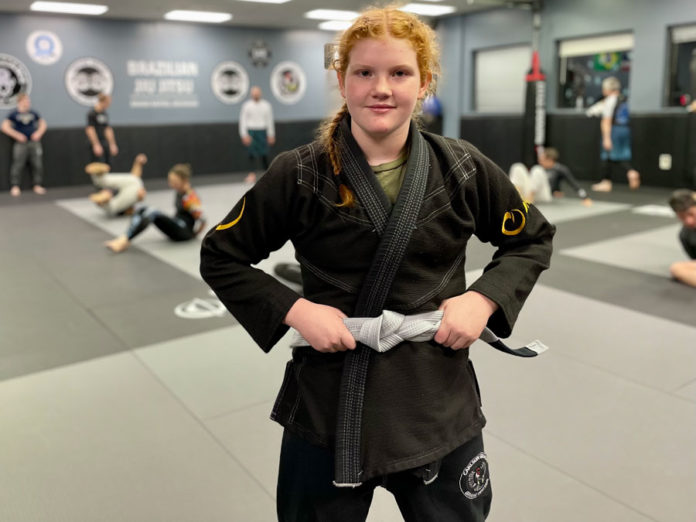 Cedar Springs — At school, this unassuming, red-headed sixth-grader blends in with the rest of her peers at Red Hawk Elementary. But outside the school walls, Zoey York is fast becoming a pre-teen powerhouse in the sporting world of Brazilian jiu-jitsu, earning national rankings and competing with teens nearly twice her age. And she’s done it all in less than two years.

How old were you when this became something you were interested in, and what’s the story there? In September 2020, when Zoey was 10, her brother took a jiu-jitsu class for fun. Hearing good things, Zoey decided to try it herself, “and I learned that I like it way more than he does,” she said. “I saw how big of an effort people (at the jiu-jitsu gym) put into what they were doing, and I thought that was cool and I wanted to try to do it, too.”

For the uninitiated, Brazilian jiu-jitsu is a mixed martial art based on ground fighting, grappling and wrestling. The defensive sport, sometimes referred to as “the gentle art,” promotes anti-bullying and operates like a game of chess, where people use every part of their body to gain leverage against their opponent and take them down.

At Carlson Gracie Grand Rapids, the gym where Zoey trains, she is physically larger and stronger than most other kids her age. This means she often takes classes and trains with adults, which has helped advance her skills. In addition, she’s usually paired up against teen boys in the same weight class at tournaments.

“I would like to consider myself pretty good at being a fighter, physically and mentally. But I’m really good at learning how and when to use the things that (the coaches) teach, and where and why to use them. … I wasn’t really thinking big about it until, like, a few tournaments in, and I wasn’t fighting kids, I was fighting teens. And I was like, ‘Oh, I’m pretty good at this.’

“I do believe (jiu-jitsu) made an impact on me as a person because I was not the most confident child before, and it really helped my confidence to see what I can do and what I could do in the future.”

A few related accomplishments: In 2021, Zoey competed in the FUJI BJJ national championship tournament, fighting in both the Gi and No-Gi divisions. A “gi” (pronounced “ghee” with a hard G) is a kimono-like outfit worn during some jiu-jitsu competitions. The fight uses the same skills, but wearing a gi gives competitors extra places to grab or pull on their opponents while fighting, whereas no-gi competitors just wear leggings and a long-sleeved shirt.

“It’s cool, because I can be, like, ‘Hey, I was third in the nation — isn’t that pretty cool!’ So I guess I have some bragging rights. But I don’t tell a lot of people. Why? Because it’s hard to explain and there’s a lot to explain (about jiu-jitsu). I have told a few really close friends, and I’ve shown them a few medals, and that was pretty fun.”

Zoey’s also currently training for her first international tournament, which will happen this coming July.

Is there a teacher or coach who has had a big impact on your progress? Throughout her jiu-jitsu training, Zoey has worked closely with coach Malachi Moore at the Carlson Gracie gym. Malachi is a junior at Godwin Heights High School and has been practicing the sport since he was 4 years old.

“I find his teaching really valuable to me because he always has something that you can add on to your strategies,” Zoey said of Malachi. “He’s serious about the sport, but if you make a mistake, he’s somebody who will joke about it with me and then go in and help fix it.”

As for her coach, Malachi said he couldn’t ask for a better student than Zoey to work with.

“She’s pretty well disciplined, she listens, she works hard and she does just about everything you could ask a student to do,” said Malachi, who has been coaching since he was a freshman. “She has quite the aggressive side when it comes to competition. … I think naturally, mentally and physically, she’s quite good at it. She was able to pick up the basics really quick and now she continues to pick up new things and adjust and fix them to what works for her.”

Do you plan to pursue this professionally? While Zoey isn’t sure what the future holds for a career, she would like to keep jiu-jitsu as part of her life: “I would like to see it as something I do for a very long time, because I’m a giant fan of it and it’s really cool to see myself grow. There’s probably other sports that I would like to try, but right now I enjoy it more than most of the other sports I’ve ever done.”

The biggest lesson you have learned from your involvement in this is… “I learned that I’m a lot better working by myself, so that if I lose, I’m not holding back a team effort. But also, (my coaches) don’t judge you if you lose, and I think that helped me to be more confident. Like, there were a few rough tournaments (at the beginning), but it wasn’t so bad that I wanted to quit. I just had to come back the next day, like, ‘Okay, that happened, so next time let’s not have that happen again.’”

Other hobbies/interests: Zoey joined the Cedar Springs 6/7/8 grade co-ed wrestling team this year, both because she enjoys the sport and also to help improve her take-down strategies in jiu-jitsu. During the summer, she enjoys playing volleyball.