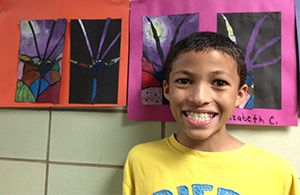 Explorers had spotted the strange creature before in the rainforest swamp. Part crocodile, part lizard and part snake, the Crocakeard could sense predators from far away. “He was living in the swamp and these lionwolves tried to eat him, and he tries to take them down,” said Jayden Miller, a fifth grader at Godfrey Lee Elementary and creator of the creature. “He goes into the water, and the lionwolves don’t because cats don’t like to get wet.”

Miller was among 1,802 students last year who participated in the Language Artist program of the Grand Rapids Arts

Museum, and one of two Godfrey Lee students whose art was chosen to be in the GRAM exhibition. The program, geared to third- and fourth graders, helps improve the students’ literacy through art. It includes a two-week introduction to art in the classroom, followed by a museum visit where students get to discuss artwork with what they’ve learned in the previous weeks. Back in art class, they come up with hybrid animals and make artwork of their own.

Later, they will write a story based on their drawing and a second one that compares their piece to one in the museum. After participating in the Language Artists program, the best works of art are selected by Grand Rapids Museum staff to be part of the museum’s exhibit.

All of Grand Rapids Public Schools third graders, and Godfrey Lee’s fourth graders participate in the program. In their stories students have to include a conflict and describe how the animal adapts to its habitat, its predators and place in the food chain. 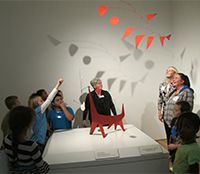 Godfrey Lee Teacher Tom Wier said the program has worked well for his students, improving their storytelling skills while also allowing them to take ownership of their work. “It brings so much science and art together, and the kids are really amazed that we can do science while we do art, that we can do writing when we do science. It really helps them improve their descriptive writing because they have to describe with details. And because it’s their piece of art, it really gives them ownership of their writing and of their art work,” he said.

Christopher Bruce, who oversees school programs at GRAM, said having students learn about art, science and literary terms and about the pieces of art before they get to the museum is empowering. 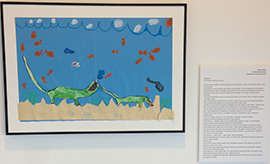 come here, they’re invested in their learning, they’re excited to see the objects they’ve been learning about, and they want to talk about them.”

During their visit, students focus on concepts of problem solution, storytelling (beginning, middle and end), and compare and contrast, all areas required by Common Core standards as well as areas that are tested on the MEAP.  It seems to be paying off, Bruce said. Data from GRPS shows that schools whose students have participated in the program have shown up to 20 percent increase in MEAP scores.

“Obviously, we cannot say that our program alone is the reason why these test scores are increasing, but we suspect that it’s a large component of that increase,” Bruce said. This summer, he convened a task force of educators from different disciplines to develop resources for fellow educators. The results of their work will be unveiled Nov. 5., with all educators in the area invited to the event.

For Jayden Miller, creator of the Crocakeard, the program worked. While he’d learned about reptiles in second grade, he said he enjoyed being able to use his knowledge in a painting, his favorite part of the program. “I like the art better because I get to use my imagination,” he said.